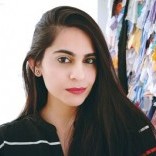 Basmah Sakrani is a Pakistani-Canadian writer living in Memphis TN, with her husband and two dogs. Her work has appeared in Woven Tale Press, Past Ten, Noble Gas Quarterly, and other journals. Most… Read more » 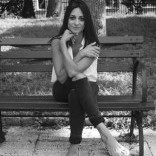 Emily James is a former high school teacher and writer in NYC. She is the submissions editor at Pidgeonholes and the CNF Editor at Porcupine lit. She’s a Smokelong Flash 2020 Finalist, and the… Read more »

Like you could describe them, like they are in a museum, or a main dish on a restaurant menu.

They’re cool, you reply. And you don’t say more.

Because some days, they ask to talk to you alone real quick outside the classroom, so you squeeze past their classmates’ chairs, step into the hallway where it smells like rotted boxed milk. They hold a crumpled five-dollar bill and whisper like a dark secret: Do you have change for this? I want some Cheez-Its from the machine.

Some days, they spray their long hair down with Japanese cherry blossom, shoop shoop shoop, walk into it, turn in a circle.

And the days they aren’t, they make it to the top anyways, without inscription, without lead on paper, just standing in front of you with their new fleece sweater and… Read more »