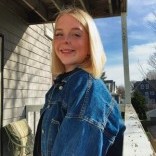 Emily Chase - Give and Take

Emily Chase is a writer living in Winthrop, Massachusetts. Her essays focus primarily on issues of class, work, family, and womanhood. Her essay “In Defense of Grudges” was selected as a notable… Read more »

The Christmas tree in our living room is a depressing, fake little thing, with gaps between the branches that no amount of homemade ornaments could fill. It’s an artificial green, nothing like true pine. A hand-me-down from our aunt. We can’t have a real tree because my brother, Justin, is allergic. We are also not the type of family to pile into an SUV and drive to a Christmas tree farm. We don’t have an SUV, patience for one another, or money to spend on something that will eventually die.

It’s our first Christmas in the new apartment, which is worse than the one we lived in before. It’s small—a two-bedroom for the five of us. We’re on the second floor of a three-decker house at the top of a steep hill on a dead-end street. On one of our first nights here, I was on the front porch when I saw the woman from downstairs get into a car, drive it slightly down the hill, then get out and let it roll into the house at the end of the street. I slipped back inside, careful not to let the screen door slap, and told no one. When the… Read more »