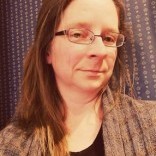 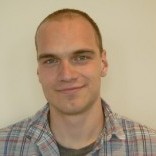 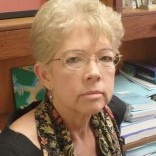 Rosalyn Rossignol, PhD, is an artist and writer who lives in St. Thomas, U.S. Virgin Islands. She has previously published two books on the 14th century poet Geoffrey Chaucer, a number of short… Read more »

What I remember most was the dogcatcher keeping his distance from me and the black German shepherd.

He hadn’t been able to catch her.

I had. I’d laid my bare hands on her neck, searched for the thin collar deep in thick fur, hooked my fingers under it, held her safe from the traffic. I’d done it without thinking.

Half an hour earlier, I’d been jogging the riverfront bike path next to the three one-way lanes of Front Street, which heads toward downtown Harrisburg, Pennsylvania. It’s an urban park with gardens, benches, and exercise stations. The wide and old Susquehanna River borders the park on the other side, with steep and weedy banks. From my house to Division Street and back is about a two-mile jog.

A city maintenance truck was blocking the path, and I was thinking of using it as an excuse to turn back. It was June and already humid enough to kill my will to move. But then I realized it was the truck of the city’s animal control officer. The dogcatcher! I jogged faster. I spotted him a ways down the path, in his dirty brown uniform, which made him look like… Read more »