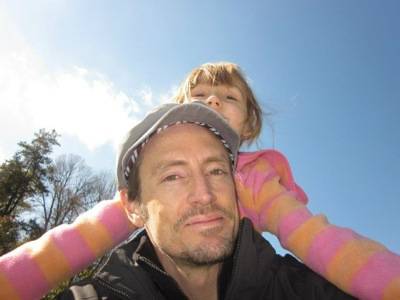 Matthew Hobson’s work has appeared in literary journals including Hayden’s Ferry Review, The Chattahoochee Review, River City, South Dakota Review, and Gulf Stream Literary Magazine. He is a man of a million hobbies, a few of which are rock climbing, making functional art-quality boomerangs, pickling stuff from the garden, binge watching British crime drama on Netflix, painting on the backs of pizza boxes, and riding bmx flatland. He teaches writing at Loyola University and lives in Baltimore with his wife and two children.

Walking one fall afternoon, my daughter and I find a dead bird on the roadside. Small and perfect, bright blue, with beak and eyes black as obsidian, it looks like it could have been alive only moments before we found it. Maybe it felt something inside itself winding down and decided to land, rather than fall from the sky. My daughter stoops to inspect it. She’s seven, a sensitive child, and already I’m rehearsing what I’ll say when she starts crying. “This particular bird,” I’ll tell her, “wasn’t very nice to the other birds. There’s no need to feel sad.” Out of nowhere, though, she asks how my father died. He died decades ago, when I was only slightly older than my daughter, and what few memories I have of him are dull and imperfect. That she’s asked at all is strange, since I seldom speak of him. But, it’s especially strange since lately I’ve been thinking of him more than usual because I recently passed the age when he committed suicide. I don’t know what that fact means, but it seems like it should mean something. I used to wonder if there was a suicide gene, if I was carrying that dark potential inside me like a time bomb hidden in the ductwork. So, maybe it means that if the bomb hasn’t detonated by now, it never will? I don’t know how to respond to my daughter’s question. I’d like to say my reluctance to tell her the truth is out of some deep parental desire to shield her from ugliness. But, frankly, it has as much to do with shielding myself from shame. Whenever someone asks how my father died, I usually say something like “car accident” or “cancer.” I’m thinking about telling my daughter a similar lie, but she’s already lost interest in the question. She stands up. Very gingerly, she touches her toe to the bird’s blue breast and applies gentle pressure, which expels the air trapped in the bird’s lungs. For a second or two, the bird is trilling, a shockingly beautiful song that, I imagine, is the sound a soul makes leaving the body.

“ The detail of the dead bluebird singing, coupled with my daughter’s curiosity about my father and the strange milestone of my having passed the age at which my father committed suicide—this essay felt like a gift. Writing rarely comes easy for me, but this one poured out in one sitting. Upon reading a draft of the essay, a friend made the connection with Stanley Plumly’s beautiful poem, ‘Cedar Waxwing on Scarlet Firethorn,’ which links birds and suicides. I hadn’t read that poem in years (I just re-read it, and damn!), but while I wasn’t thinking of it as I wrote the essay, it must have been composting in my unconscious the whole time. ”