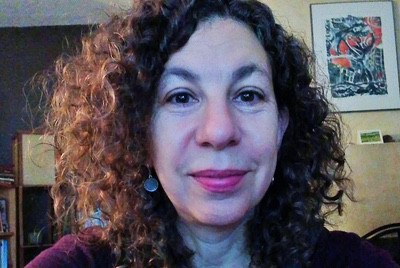 Rebecca Aronson is the author of Ghost Child of the Atalanta Bloom, winner of the 2016 Orison Books Poetry Prize and finalist for the 2017 New Mexico/Arizona Book Awards, and Creature, Creature, winner of the Main-Traveled Roads Poetry Prize (2007). She has been a recipient of a Prairie Schooner Strousse Award, the Loft’s Speakeasy Poetry Prize, and a 2018 Tennessee Williams Scholarship to Sewanee. She has poems recently in South Florida Poetry Journal, Tishman Review, Sugarhouse Review, Quarterly West, and others. She is co-founder and co-host of Bad Mouth, a series of words and music in Albuquerque, where she also teaches writing. Her website is http://rebmarack.wixsite.com/rebecca.

Dear Gravity [Shall I Call You Shiva?]

Shall I call you Shiva? I know your pleasures:
taking down an overpass, toppling a crane. You
downed a space shuttle for its presumption. Flick
at people as we scuttle. You pulled me down once
to test my brittle frame. You win. My bones are balsa
and they bend only a little. It was just a prank; your attention
really elsewhere. Class bully, you are picking on another nerd
whose limbs stiffen like drying plaster. The rest
is air, except his solid head so full he can hardly hold it.
Things fall because space curves. Space curves because of matter.
The body’s matter displaces space a little with every step,
and so he falls, my father, his mind on the curve
of pavement, carefully treading on matter’s ghostly shadow.

Dear Gravity [May I Call You Grave?]

May I call you Grave? An old tree falls
after long weakening, after years of unseen hollowing,
and it keeps falling, rotted core turning to damp dust,
becoming earth. The body its own trench.
At the doctor’s office, the nurse says
I’ve grown shorter. Only natural. I stare hard
but can’t wipe the pleasant smile off her face.
I am sinking not quite like a ship or a deflating balloon,
but like the house’s foundation or I am the house
and the clay it is built on and eventually
the unrecognizable ruin. My mother’s hips
are out of plum; she lists like a sailboat
about to slice sideways into waves and then under.
My father’s head is even with my own, so he’s winning
the shrinking race. Imagine us becoming not just shorter
but thinner, not lying down for a last time
but disappearing altogether, like a popsicle
that has melted into a stain on someone’s smile.

“ These poems are from a series of letters to gravity. I began this series after my father, who has Parkinson’s and has been having difficulties with balance, began falling frequently. I had been reading (and am still reading) Carlo Rovelli’s Seven Brief Lessons on Physics and thinking about bodies and aging and how gravity influences our physical experience. These letters address gravity as a moody sort of god, one who can possibly be flattered or bargained with. ”