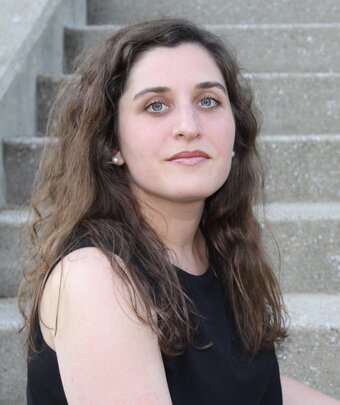 Mary Ardery is originally from Bloomington, IN. Her work appears or is forthcoming in Missouri Review’s “Poem of the Week,” Fairy Tale Review, Cincinnati Review’s “miCRo” series, Prairie Schooner, Salt Hill, and elsewhere. She holds an MFA from Southern Illinois University-Carbondale, where she won an Academy of American Poets Prize. You can visit her at maryardery.com.

All day it had poured but finally the rain slowed to drops leaking through the ember-pierced tarp. Balaclavas and spare socks spilled from packs like woolen intestines. I stayed awake longer in case the woman still detoxing couldn’t sleep and came looking for me. On a fire-ring rock, someone’s orange plastic spoon began to melt but then the flames burned down. They sank to silvery husks of branches that gave way to ash with a slight prod, the molten surface of some distant planet. So much of my time in the woods I remember as life in another world—lonely— but that night as the rain let up, I felt at home beneath the tarp, keeping vigil with wild animals. An owl called out of the dark and the embers pulsed like living jewels—red, black, red—still breathing.

“ This poem is a snapshot of my time working wilderness therapy in North Carolina. I first drafted it while attending a residency at Sundress Academy for the Arts in Knoxville, TN. My stay overlapped with the winter solstice, and I was thinking a lot about the contrasts of light and dark. I was also feeling grateful for a warm and dry bed! ”