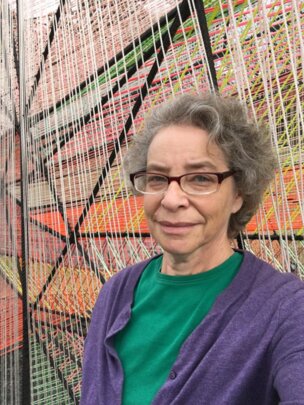 Kim Roberts is the editor of the anthology By Broad Potomac’s Shore: Great Poems from the Early Days of our Nation’s Capital (University of Virginia Press, 2020), and the author of A Literary Guide to Washington, DC: Walking in the Footsteps of American Writers from Francis Scott Key to Zora Neale Hurston (University of Virginia Press, 2018), and five books of poems, most recently The Scientific Method (WordTech Editions, 2017). www.kimroberts.org

Alexandria, Virginia
At Jones Point Park, I seek out the Boundary Stone in its niche in the retaining wall. When the Potomac River recedes enough to detect the eroding words, rimmed in green algae, I picture Banneker camping here that cold damp Spring of 1791. He is 60 years old. He lies supine each night on the ground. This is base camp for calculating the ten-mile square of Washington, DC. In the dark, he notes the exact moment of each star’s transit over the zenith. He gathers all the light of the stars to his thin chest. He is master of the theodolite. In letters, he argues with Thomas Jefferson to wean yourself from narrow prejudices that keep slaves, so numerous a part of my brethen under groaning captivity and cruel oppression. Now, in the shadow of a massive steel bridge named for Woodrow Wilson, who declared segregation not humiliation but a benefit, the water makes a hollow pong and I look across the wide dark river where for four months Banneker looked, where, among all surveyors, he completed the most difficult math.

“ Jones Point Park is located in Alexandria and is the site of the last remaining riverine lighthouse in the state of Virginia. It is administered by the National Park Service as part of the George Washington Memorial Parkway. Beginning at that location, forty stone boundary markers were laid in 1791 and 1792 to mark the 100-square-mile territory of the District of Columbia, in a diamond shape that had its southern terminus at the confluence of Hunting Creek and the Potomac River. Thirty-six of the original stones still remain, but since the retrocession of a part of the District back to Virginia, fourteen are no longer in DC. A 2011 GPS survey found the overall accuracy of the stones’ placement to be remarkable.

Benjamin Banneker (November 9, 1731 – October 25, 1806) was an extraordinary polymath of African descent who was born free in Maryland and educated in a Quaker primary school. At age 22, he built the first clock manufactured in the U.S.; made entirely of wood, it kept accurate time for forty years. Banneker studied astronomy on his own and successfully predicted an eclipse in 1789. From 1792 through 1802, he published an annual almanac using his own mathematical calculations. In 1789, he was hired as a surveyor of the District of Columbia by Pierre L’Enfant and George Ellicott. He published a number of papers, on such varied topics as mathematics, the seventeen-year cycles of cicadas, the behavior and life cycle of honeybees, and the abolition of slavery and segregation.

Woodrow Wilson (December 28, 1856 – February 3, 1924), the 28th United States President, oversaw policies of segregation within federal offices, and approved laws to make racial intermarriage a felony. Under his leadership, photographs were required of all applicants for civil service jobs. Wilson stated that these measures were needed to ‘reduce friction’ among the races and were in the best interest of all. His comment, quoted here, comes from a conference with members of the National Association of Equal Rights in November 1914. ”