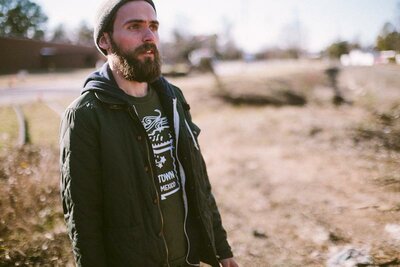 Bryce Emley is the author of the prose chapbooks A Brief Family History of Drowning (winner of the 2018 Sonder Press Chapbook Prize) and Smoke and Glass (Folded Word, 2018). A Narrative 30 Below 30 poet and a recipient of awards and residencies from the Edward F. Albee Foundation, the Glen Workshop, the Wesleyan Summer Writers Conference, and the Pablo Neruda Prize, Bryce works in marketing for the University of New Mexico Press and is Co-Editor of Raleigh Review. Read more at bryceemley.com.

“ A few years after my mom died, I started writing poems about the female martyrs named in the Roman Canon's Commemoration of the Dead as a way of writing about her. I saw her in the stories of these women whose holiness, like hers, was measured in suffering, who were revered for devoting themselves to a historically patriarchal religion. Felicity and Perpetua were executed for their dedication to that religion, and some scholars think they might have become romantic partners while imprisoned together. Studying the scene of their execution showed me a little more of my mom, someone who gave herself to an institution that has so often failed to protect those most faithful (and vulnerable) to it. ”