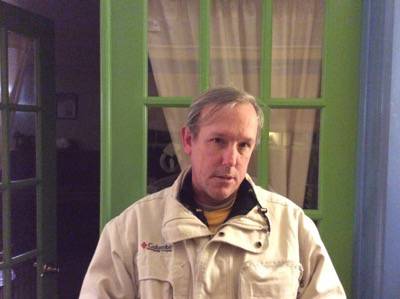 Paul David Adkins grew up in Fort Lauderdale, Fla., and lives in New York, working as a counselor. He served in the US Army for 21 years, three months, and 18 days.

Where Are They Now? – La Llorona

Same place as always:
the bars and the cars,
the bridges and gullies,
sunning with gators in sawgrass.

She claims to have lured
Weldon Kees to the bay
with a wave
of the arm,
and a smile.

Why wouldn’t we
believe her, believe
she’s marked every one of her drownings
with the plunk
of a flipped centavo?

Every boy that she claims,
every girl that she culls
from the arms of her mother

is another step down
on the treadmill to heaven.

She’s working the crowds,
mute as a Disneyland Pooh.

She hooked up last March
with Freddie Prinz.

The accent’s ditched – a flowered Microbus
in Laredo.

She wants a job with the gringos.

She’s not getting
any older.

lured a boy who thought
he had balls
for some action.

There’s something about her.

Even her bones are tattooed.

Her autographs
are worth Marilyn Monroe’s,
circa 1987.
She’s still
in the same B movies.

rolling a peso
tight on her thigh,

“ I like the idea of mythological beings assuming the stuff of legend, just like modern rock stars with their superhuman attributes and gestures, their enormous failings hidden behind a flimsy trailer door at midnight. La Llorona’s strange adventures listed here connect me directly, irrevocably, to her 500-year legend. ”

A Not-Conversation with Patrice Lumumba

I want to talk, but you’re dead.
There is no voice left.

And me?
I just thumb through pictures
in a library book
on The Cold War.

Mobutu roped you,
drove you vanquished through Stanleyville
in a battered Mercedes truck.
He burned your wrists himself
though his toughs yanked the burns
white into your skin.

You have no voice for me.

You are
your bronze Kinshasha statue:
raised fist, flapping tie.
Silent as a dust mote strung on a sunbeam,
dancing
though there is no music,
no beat to master.

You swing off a griddle of mirages,
the panting of a pride at noon.

The last of your burned and pulverized corpse,
the very last fleck
of one hundred trillion flecks,

wafts off without a voice,

but detects
even the infinitesimal tick of hyenas
padding the distant capital,

strains to hear,
then hears as it floats on the drafts,

the slow stretch and twist
of all the brown necks
of the hanged.

“ Just as I can only touch the legendary figure of La Llorona through stories, the ability to contact the real person of Patrice Lumumba, assassinated President of The Congo, is not possible. The distance extant between the living and the dead is unbridgeable here, whereas that same expanse between the living and the undead, the figments, I can cross with a thought, a story, a flit of whimsy. ”