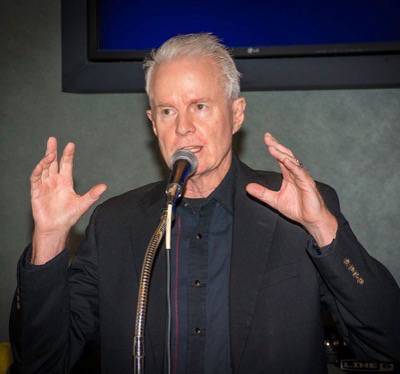 David Kirby’s collection The House on Boulevard St.: New and Selected Poems was a finalist for the National Book Award in 2007. Kirby is the author of Little Richard: The Birth of Rock ‘n’ Roll, which the Times Literary Supplement of London called “a hymn of praise to the emancipatory power of nonsense.” His forthcoming poetry collection from LSU Press is Get Up, Please. See also www.davidkirby.com.

I Love You, John Maynard Keynes

“Every point on the earth,” said 13th-century Franciscan
friar Roger Bacon, “is the apex of a pyramid filled with
the fires of heaven.” I wonder what he meant by that.
Probably that there’s all this power under our feet and that
it’s up to us to figure out how to unlock it, which, for you

writers, means to write as though your life depends on it,
because it does. Put yourself in Dante’s shoes: in the Seventh
Circle of hell, there’s a river of boiling blood and a forest
of souls that become suffering trees, not to mention centaurs,
including Nessus, who fires off a couple of arrows but then

gives Dante and Virgil a ride out of there on his back.
You can’t make this shit up, folks. You have to be there,
see it, write it all down. Otherwise, you’re just turning
the Magic 8 Ball over and over: “Most likely,” “Outlook
doubtful,” “Try again later,” “My reply is no.” That’s why

top-shelf British economist John Maynard Keynes said that
“words ought to be a little wild, for they are the assaults
of thoughts on the unthinking.” Actually, I like the Magic 8
Ball and use it often to make decisions which aren’t very
important, which, let’s face it, most decisions aren’t.

Should I eat at Wo Fat’s or Waffle House tonight?
“Concentrate and ask again.” Do I need to take a shower
or just paw myself with a washrag? “Better not tell
you now.” John Maynard Keynes, I love you so much
I want to call you John Maynard the way Southerners

call people Sue Ellen and Billy Joe. You’re so much
smarter than the Magic 8 Ball. But words shouldn’t
be wild all the time, John Maynard! What if words
were wild all the time? Either we’d be overwhelmed,
like people slathered in whipped cream, then given

hot-chocolate enemas and wrapped in live electrical
wires before being tossed into tubs of stale chablis mixed
with rancid mayonnaise, or else our senses
would become so dull that, instead of jumping around
like somebody wearing a jacket made of mice

and a pair of cheese pants who’s standing under
a molasses shower as pygmies with blowguns shoot darts
tipped with sneezing powder at us, we wouldn’t react
at all, and the words wouldn’t be wild any more:
“dynamite” would be no more powerful than “filtered tap water,”

“ecstasy” the same as “nap.” You writers make these
little buildings of mud and diamonds that most readers
will never even notice, much less enter the way Wilbur,
the neighbor’s cat, waits on our deck till I let him in,
saunters through every room in the house as though

he's thinking about buying it, and then walks right
past me without even looking as he leaves, as though to say
“No catnip farm, tuna pond, milk river?” In addition to
John Maynard Keynes, I also love Keats, silent upon his peak
in Darien and thinking about his next poem, thinking hard.

“ Rather than read self-help authors, why not read the big guys? I figure Roger Bacon and Dante have more to say to me than Deepak Chopra, and I'd rather get caught reading them on the bus. As far as that goes, the Magic 8-Ball gives consistently good advice as well. ”