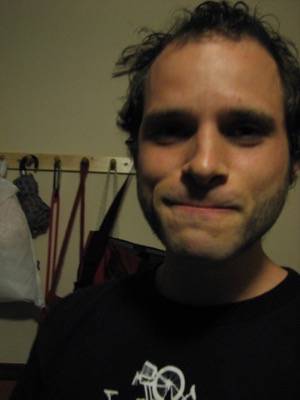 Dan Malakoff’s short fiction has appeared or is forthcoming in Pleiades, Prick of the Spindle, The Long Story, Ellipsis, River Styx, and other journals, and he has a novella out from Comet Press. He’s a graduate of University of Pittsburgh’s MFA Program.

Over the bridge and down the road to the gas station, where she calls her parents from a payphone. He leans against the brick, smokes and listens to her ask for one more hour, so that they can get dessert at Kyle’s bakery out on Route 1. When she hangs up, he stubs his cigarette in the urn of sand. Inside he knows where to find a 99¢ condom. He reaches in his pocket for a crumpled bill and asks the cashier with the baggy eyes of a walrus to let him slide on the tax. She does.

Back on the road, she speeds with his hand on her thigh. He feels the grooves in her corduroys and her heat, and he feels cold but they are still together, the night isn’t over. Outside his window, the newly frozen land swoops by; the snow won’t melt until May. An occasional car passes, kicking up salt that crackles against the steel body of her dad’s Volvo. When she can borrow it, she comes to him.

He hacks up phlegm and lights another cigarette from a depleting soft pack. He exhales out the window and the smoke blends with the fog in the shallows of the road. She looks over at him and swallows. He knows she worries her father might smell the smoke in the gray felt that carpets the roof, though he never has before. He pinches the cherry off the end of the cigarette and places the butt in his pocket to dispose of later, the way she insists he do.

The turn-signal ticks. He tries slowing his heartbeat to match it. They pull into the parking lot of the church where they’ve learned to come in their spring-summer-fall together. The police once found them in the park. By the ocean, too, the police knocked on the window glass. But the police have never found them here. She parks, leaves the key in the ignition. The light from the high concrete poles pushes through the windshield yet stops short of their faces. He asks, almost in a whisper, Baby?

He unbuckles his seatbelt, leans across the stick shift, and kisses her, his bottom lip dragging from her upper lip. A car swishes by on the wet road; he pulls away when her lips don’t gather. He wishes that they’d been drinking. Then they’d be laughing and playing reckless and reveling in skin and letting thoughts of tomorrow slip down into the car seat, change for some next telephone call. Her eyes move past him, toward the road.

He dreams of eloping and building a house together in the woods. All he wants to do, all he can do is keep her warm. But tomorrow: A strand of her brown hair on his hoodie, an echo of her in a stranger’s patter. He is too old, going nowhere, her parents say. It is too serious to let continue. In winter, the snow buries fall’s leaves.

She touches his face, drawing her fingers from his temple to the tip of his jaw, a crescent to match the waning moon. She turns the key in the ignition, says, “My curfew.”

“ I grew up in Pittsburgh but floated about as a teenager. One place I floated was Portland, Maine, where I was madly in love with a girl whose parents were less than enthusiastic about their daughter dating such a floaty boy. The girl and I got caught doing something or another, and off I went on the Greyhound alone. The girl was not allowed to see me off. ”