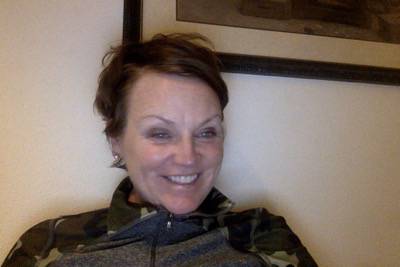 Teacher Thompson was without Habit. City smart with coiffed do and starched collar, we thought she had that Unknown, Life’s coveted Mysteries, all jacked up like Houdini in her ironclad briefcase. She was so slick in her optimism. We almost believed it.

She came to us just before summer break. Another replacement for old Mr. Jenkins who lost his wife to The Cancer and his mind to The Loss. Something about poison in the well, from where we wetted our youthful calves on a mountain spring we believed still ran pure. No matter. Our parents knew him when they wore nickers and now he was gone gone to that place where the old teachers go. When they’ve nothing more to teach, and have learned too much.

Teacher Thompson was no mistress to Jesus or slave to history, like the others. But, we learned, a soldier to grander illusions. For, there was no real war. Not out here, she said. She’d escaped it. Found solace in those tilled fields of our fathers and jars of gin, stilled by our mothers. The only smell of Death, horsehair and vegetables beginning their rot under ground in fall. Her first summer assignment: Examine the Birds. Connect Nature to Human Existence. Enlighten me, Rural Child. Well?

We sat there sweating in our follies, in our ignorance of her failed quest that returning fall. Teacher’s blackboard, a benign battle zone of blankness set against her will.

Then the school bell tolled. And Jimmy Bowden suddenly took a stand in back. That fall, he’d shed his Pendleton for black trench and surely carried a piece in his brown sack lunch, snuggled to peanut butter and jam. He blew us away. Claimed he got a sad box of crap in the mail, instead of his brother. Lost to some war no one whispers about anymore. Not out here. Where is Fallujah        anyway?

Thompson could take that whip of a ruler and point across the map like a magician. But wouldn’t. What of birds? Of seasons? Of life?

Jimmy fired on, boasting that his older sister went out the third story high on meth, their brother’s tags wrapped tight round her neck like some junkyard dog. She didn't jump. Hell no. For a second, she flew. Jimmy knew. He’d been sitting in his underwear, notepad and pencil in hand, as requested. He’d observed the old oak outside their brother’s bedroom window, its dark wetted knot, home to baby swallows.

A vision that should have horrified us. But didn’t. He was gunning for It, man. He didn’t spare one detail. He unchained all Life’s Mystery: He didn’t give a shit anymore. For, Sister found It. Birthed Enlightenment. He witnessed her wings taunt in denial. Noticed how they seemed unearthed, those little swallows. Untouched by The Madness. Disconnected.

Thompson dropped her chalk, motioned with fluttering hand for him to Ssshhh, please. But who was she now? Some page turner, projector flipper, quoter of things already quoted. Giver of lessons already learned. Her iron-clad case melting down, smoking from within. Toxic from the trash of hearsay and reality. From news reports and edited Truths.

She just needed a little bump.

Well, hear this Thompson: Sister just missed it. The oak. On the way down, a wicked limb tore her satin drawers. They swung soft in breeze like tattered flag. An offering to fledgling nests, Mothers carefully gathered it as twig from wind-blown willow. And the chicks, they never skipped a beat, chirping for worm when her head hit earth, cracking