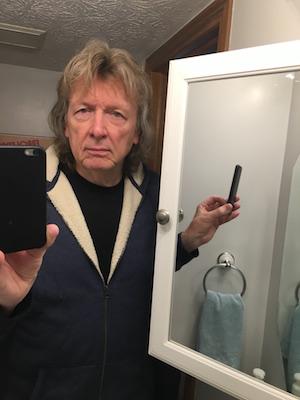 Roy Bentley has received fellowships from the NEA, the Florida Division of Cultural Affairs, and the Ohio Arts Council. Poems have appeared in The Southern Review, Shenandoah, Pleiades, Blackbird, North American Review, Prairie Schooner and elsewhere. Books include Boy in a Boat (University of Alabama, 1986), Any One Man (Bottom Dog, 1992), The Trouble with a Short Horse in Montana (White Pine, 2006), and Starlight Taxi (Lynx House 2013).

This is the classroom, a land of Crayolas
and Nap Time where platoons of inside voices
identify which bodily function requires answering
by raising the appropriate number of fingers
into the air of 1960. Take this quiet child.
Take a good look at something in his face.
He’s been coloring the same standard-sized
sheet of milk-white paper for fifteen minutes,
and he lacks one cotton-ball blossom of a corner
before he can call it a day. But is black a color?
The truth is that it’s in the carton of The Box of 8,
where undersides are flattened to prevent rolling.
To him, the statuary stick figures are Eskimos
bundled to the point of facelessness in parkas of
moonless night. Which is the explanation he hopes
rescues him from the teacher with the dark down
above her upper lip, a woman bending to offer
the bald fact that black is all colors absorbed
and so it’s not a color. Not in the usual sense.
A pigment. Her wide-open eyes are a future
of shift after shift of feeding unpolished metals
into a polisher with the threat of lay-off or firing
a black possibility. Her bland pronouncement
is the foreman telling him to “get the lead out,”
ordering him to work the overtime he’s offered.
And not to give him any lip, no sir. What’s rare
and irresistible about the kid isn’t overlooked;
it’s like the shadow made by a fence, any fence—
something extra. It isn’t required, but he blushes
as he brushes back a lock of hair and hands her
what he calls “Eskimo, Walking at Midnight.”
She holds it like it’s the body of something feral.
Dead. His father’s paid good money for the look
Miss White gives him that might as well be a slap.
At 6, he’s already been back-handed once or twice.
That’s a look of his own he’s crafted as answer.
Listen:
« Previous