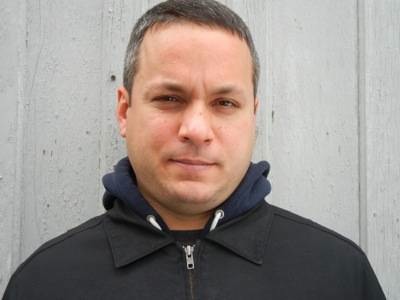 Michael Capel received an MFA in fiction writing from Boise State University. His short stories have appeared in Sou’wester, South Dakota Review, Barnstorm and Existere. Born in upstate New York, he currently lives in Idaho with his partner, fiction writer Mollie Ficek, and their dog Rusty.

McRory, that dusty old woodpecker, somehow spots me from down the street going into Slick's, and that's one right there, then I come out for a smoke and that's nothing, but the beer in my hand is most definitely two and when he creeps up and hits the siren one time, laughing with his pointy, red head out the window, I drop the damn Heineken and it shatters on the sidewalk and he says, Littering. So that's three. Then I'm in the back of McRory's roller, and he's saying, You're like that one Bugs Bunny cartoon, where he's the pitcher. And I say, You're like that one Porky Pig cartoon. Actually, I say, you're like all of 'em. McRory laughing again.

We go way back, me and McRory. First time he busts me—'81—I open his forehead like a mango with the ring Lizzy bought me for my eighteenth. Blood spouting down his face. This one’s got some hands, McRory says, calling it in. Then he breaks my arm. Whoops, he says, and sprays a little blood off his lips into my eyes. Us two: we go back deep.

Plus six in the halfway house, McRory says. For the beer.

Could just let me out, I say.

But what about our quality time?

Yankees are playing free ball. Nine-nine in the twelfth.

Sure it did, he says, and then we’re quiet, bumping downtown to booking.

Word around shop is McRory’s got cancer. Late stage. Any day he's going to trade in his blues and his badge for a hospital gown. So I say, Hey pal, word is you got the tumors bad. Brain, bones, everywhere.

Just my kidney and my tit, he says.

Both of ‘em. Don’t fuckin’ laugh about it, neither.

So you’re all right then, I say.

Nah, he says. I’ll be gone, time you spring out.

McRory pulls a hard left. Sends me flat on my bum shoulder, and I have to worm myself upright.

Me and you then, this is it?

So just let me out. I’ll walk.

McRory stops the car. Slams right on the brakes.

Okay, he says. Gets out. Opens my door. Gets back up front.

Hell no. Too easy.

Good for Chi-Chi, he says.

I step out. The street is dead. McRory flips the radio on and the stripes come through. Still 9-9, bottom of the thirteenth.

You letting me walk?

Soon as you get in my headlights, I’m running your ass over, he says. I’m gonna floor it.

Bullshit, I say. We got too much history.

We do got that.

And here’s what we come down to: me cuffed, shuffling down the street, McRory with his roller in neutral, door open and his foot pedaling the pavement like Fred Flintstone. Me almost fifty, headed for another stretch. Him almost sixty, headed for the big one. Both of us eyes ahead and ears on the Yanks going into fourteen, knowing this one can’t play on forever.

“ My grandfather was a baseball fiend. A real ascetic. I went to Yankee Stadium with him once when I was twelve or thirteen, and he only watched the game so he could keep his scorecard accurate. I can also vividly remember him watching games silent as a statue in his living room. He never shouted or clapped at the TV; he never stood up. If he said anything about it at all it was under his breath, a kind of internalized mumble that was intended more for himself than anyone else in the room. It was meditation for him, I think. Mesmerizing more than it was agitating, although I know there were several seasons he'd rather have missed.

It was also one of the last things we did together: watch the Yankees in his hospital room. He only lived a few months after that, and even though I wasn't necessarily in the right frame of mind to ask him all the things I could have—or should have—asked him about his life, I understood that right then and there, while the Yankees were playing, was probably not the right time anyway. ”