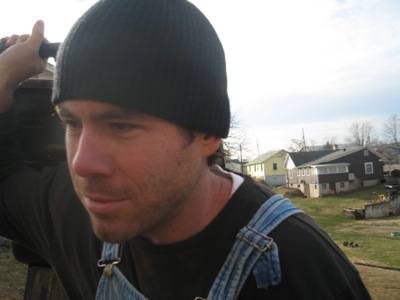 Clay Matthews has published poetry in journals such as The American Poetry Review, Black Warrior Review, Kenyon Review, Gulf Coast, and elsewhere. His most recent book, Pretty, Rooster (Cooper Dillon), is a collection of sonnets written in syllabics. His other books are Superfecta (Ghost Road Press) and RUNOFF (BlazeVox). He teaches at Tusculum College in Greeneville, TN, and edits poetry for the Tusculum Review.

An Angel Gets Her Wings

On television there’s an old movie about a ghost
that’s come to change a man’s life.

Next door the little girl howls
while her parents fight over a lost pipe.

The days are punctuated by street corners
and looking out windows,

the nights by deadbolts and Christmas lights.
Yesterday we had the Sweet Gum

tree in the front yard cut back,
leaving what we thought would survive.

To persist: a yellowed crack rock
in a sandwich bag, a fifth anniversary

party, a broken branch hanging down
still putting out a flower and leaves.

My daughter, two, flaps her arms
like wings and cries out: I can’t fly.

The dark sounds, she says, owls
in the night, a train in the distance;

she believes so deeply in the moon.
If you are good, the season will reward you

with ribbons and bows. If you are bad,
it’s all branches and blesséd stones.

Semis bounce down the road, and I never know
what they’re hauling. A choir of angels, maybe.

A load of pallets—worthless, except
to hold some heavy burden and raise it up.

The radio plays all the songs we know,
the wreaths encircle the front doors.

From the bridge on television, the water looks
cold and beautiful. From the water

the windows look warm and full of song.
I want to wrap the little girl next door up

in a blanket and lay her under the tree.
But I don’t know where to begin.

“ ‘An Angel Gets Her Wings’ is a poem about neighbors and neighborhoods. There’s a playground in one neighbor’s backyard where my daughter plays, often with another neighbor’s child about the same age. At some point during the holiday season last year, everyone had gone to bed and I was up watching It’s a Wonderful Life alone. I don’t think I’d ever really felt much about that movie until then—being older, having a child, thinking about flying and the past and regret and hope and indecision. Somewhere in the midst of all that I got that warm fuzzy feeling when you feel this peace in knowing things ought to change. I wished I could keep everyone in the world warm right then, especially the little girl next door, the friend of my daughter. ”