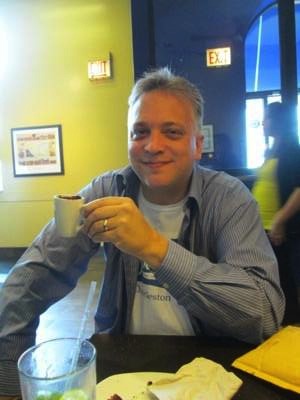 On the Numbness That Will Be Our Future

And then the weather turned cold and never got better,
and we were forced to wear our sweaters later and later,
at high-school graduations, mid-June in Key West, these bright
commencements of the brightest, where shivering we sat,
surveyors of risers in our puffy vests. We would have cheered
had we not been holding our mittens, or holding the white
elastic that held them, tenderly permanent equipoise of decay
and perseverance. On most days we were wind-bitten, chapped.
Soon we sought maps to release us from unseasonal fronts,
which became constant, sans season. We took our winnings and spanned
the round world’s four corners for white sands and comfort, but no
matter: to no avail. Even the grand beaches failed to please us
then, in those final days, even the blazing views of Australia’s
Great Ocean Road were rendered with wind-chilled sameness,
Apollo Bay and Cape Otway just another Siberia more or less,
and we visitors who had so hoped for improvement, increased
vision and lifting temperatures, or at least inhabitable encampments
displaying vistas more welcoming, we too were growing ever more
forlorn, cut to the very bone by continually plummeting cold.
It kept expanding across the old world and new. By the new year
of the last year, we stood on the shore, backs to fires,
to ponder the Southern Ocean, and wonder if it were not
some great arbiter of our unwished-for, possibly merited fate.
We rubbed these thoughts together for it was all we had left,
like the mind’s final, desperate kindling. Then our hands turned black-blue
and hope went cold, as our hair filled with salt and frost and fear.

“ On one hand, this remains for me one of my stranger poems, and still I really don't know what to make of it. On the other hand, I can still sense those various parts at work—doing quick work back and forth, or link to link—that can make writing poems so satisfying sometimes. At times when writing, you just want the freedom to move and discover, and lyric poetry may be uniquely obliging in this way. At one point, those parts may seem utterly oppositional or merely chaotic, but you keep hoping that they may become complementary, may begin to work together so that the poem will hold together, somehow shapely in its improbability and surprise. Many things here feel like they are at odd angles, but somehow they find their places in the poem—the geographical caprice, the tonal shifts, as mittens and puffy vests give way to a Latinate handful of a phrase that might be from a sermon by the seventeenth-century Anglican divine Jeremy Taylor. (It's not, but it could be.) I was trying to see if whimsy and ultimate menace could live together in this poem. It begins as Wes Anderson, and ends as Cormac McCarthy. And who knew I would be writing these requested remarks a week after much of the United States was socked by the polar vortex?? Wild. Thinking of that -16 windy day in Chicago last Monday, I am reminded again, humbly, that the big thing imagined is usually far less vivid than the smaller but real version of the thing when it's actually felt, feelingly persuading us what we are. ”