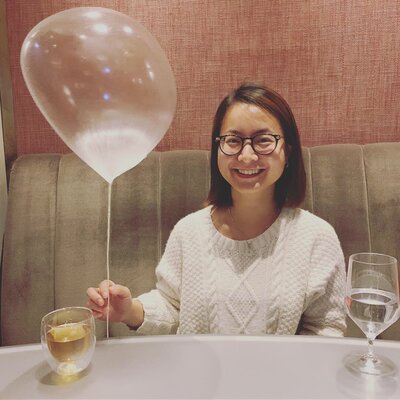 Yunya Yang was born and raised in Central China and moved to the US when she was eighteen. Her work appears or is forthcoming in Epiphany, Hobart, and Gulf Coast, among others. She currently serves as an assistant editor for Barrelhouse. Find her at yunyayang.com and on Twitter @YangYunya.

She centers a tear-drop jade pendant on a silk scarf, folds the four corners on top of each other, flips it, and ties it up with a gold string. She admires her neat packaging, pats it twice with her fingertips, then slips it in the tiny inner pocket of her handbag, perfect for its size. On the fourteen-hour flight from Shanghai to Los Angeles, she reaches inside the bag and feels the comfortable weight of the small stone.

On her daughter’s wedding day, she dons her red qipao, pressed in early morning after a sleepless night, smooth like a mirror. Her daughter wears white, as is customary in a Western wedding.

Before the ceremony, she strings the pendant through a red thread and puts it around her daughter’s neck. The tear-drop stone sets right at the dip of her collarbone, marbled by smokes and fogs of soft green.

When her daughter stands at the altar, next to a straw-haired man, in front of somebody else’s god, she notices that the jade is tucked behind the lace of her daughter’s white dress.

Almost a hundred years earlier, a young woman steps off a green-skinned sleeper train in Shanghai. In her hand she clutches a telegram, which she shows to one of the rickshaw pullers loitering in front of the station.

It’s plum rain season and a curtain of drizzle falls as they race on the streets, next to trolleys, bicycles, and motor cars. Strange buildings loom on both sides of the road, with round domes and curved facades, like fat giants with protruding bellies. She stares at the foreigners walking in and out of those buildings, men in wide-brimmed hats and women with white, laced umbrellas.

They arrive at the gate of a university. The young woman pays the puller with three coins she fishes out from the hidden pocket inside her coat.

She stands by the gate and waits for her husband. They’ve been married for five years, and this is the second time she is meeting him. She doesn’t quite remember his face, for the first time she was under a red wedding veil most of the night, staring down at her silk shoes.

Her husband left the morning after for his studies in university. He is a modern man with modern ambitions, and in need of a modern wife. A month ago he telegraphed her, informing her that their marriage is annulled and he has proposed to another. Before they part ways, can she please return the family heirloom?

A week before boarding the train, she bought a cheap replica of the tear-drop pendant. His new bride will not wear the jade that warmed her skin and bore her hopes.

She smiles in secret triumph as a man calls out her name.

Three centuries before, a mother crouches in the shrubs across from a Western temple, watching and waiting. The sun is climbing up, painting a small bundle on the doorsteps in gold.

The mother walked all night to town with her newborn girl strapped in front of her chest. She picked up a tree branch as a staff, leaning on it now and then to rest. Even at night, the air felt sluggish and the heat weighed her down. The drought withered most of their crops, and they have already emptied the storage. This winter will be long and dark, although coldness seemed a welcoming prospect as she stumbled on the dirt road, sweat burning her eyes.

Her neighbor, who is also a mother, told her that a foreign monk in town takes in babies. The god they worship is a woman, she said, a woman holding a baby. Theirs must be a merciful god.

On the wrist of her girl, she tied a tear-drop jade pendant. It is what’s left of her dowry, which she hid from her husband. She imagines one day, many years later, if she is lucky enough to grow old, she will run into a young girl on the street, wearing a silk skirt and a modest smile, with a tear-drop jade on her delicate wrist.

Suddenly, a beggar walks up to the bundle, snatches the jade, and dashes into an alley. The mother freezes in shock. When she is about to rush across the street, the door of the temple opens, and out steps a strange-looking man with deep-set eyes, bluer than the sky above. The mother watches, immobile, as he picks up the baby and disappears behind the door, without the one thing that might bring the girl back to her again.

Over a thousand years earlier, a scattered line of riders slumped on camel-back advances westward on the Silk Road. Night falls on the desert, strips the heat from the sand, and hangs an over-sized moon halfway in the black sky. A ghostly wind howls in the distance.

Among the travelers is a maid wrapped in linen from head to toe. Her body sways with the animal that bears her. She has lost count of how many days they’ve been on the road and knows lesser still how many more they must go.

Her throat burns. The wonder of freedom is wearing off.

An orphan raised within the walls of the palace, she had never seen the world beyond the iron gates of the royal city. Her opportunity came when the emperor assigned her to accompany the princess on her journey to wed a foreign king. Marriage in exchange for peace. She’d been eager to see the sky uninterrupted by the fly-away eaves.

The sky in the desert is boundless. It folds her in, ever-stretching, ever-rolling.

A thump pulls her out of a daze. The princess has fallen. The procession stops. Envoys and servants crowd around the bride. A trembling finger is placed under her nostrils, and a gasp says it all.

The maid stares at the dead princess, then starts to strip her. Angry reproaches are fired, but she pays them no heed. In a moment, it dawns on everyone that the journey must go on, war must be averted, and a princess matters not.

The new princess climbs on the camel, wearing the old princess's clothes and jewels. In her hair, set at the head a silver pin, is a tear-drop jade.

Five thousand years ago, a young concubine sits in front of her bronze mirror. Her brows are dyed, hair oiled, and face powdered. A jade pendant hangs around her neck, sculpted in the shape of a teardrop, a token from her mother. She looks almost as beautiful as she did on her wedding day, when she was carried away from her tribe as a gift to the aging emperor.

Outside her window, a pear tree blooms. White petals cascade in the soft breeze of spring, twirling as they fall. She is reminded of fresh snow from her homeland, which she hasn’t seen for years.

She dabs on a crimson-colored paste and paints her lips with a shaking hand. The faint wailing in the distance moves closer and closer. She takes a deep breath and walks out of her room, steps towards the road, and kneels on the stone not yet dried from last night’s rain. Her white mourning dress drags on the ground, soiled in the muddy water.

The emperor’s funeral procession passes before her, and she bows down, her forehead to the cold ground. A dull pain grows each time her head hits the stone. A servant at the end of the procession drops a strip of white silk at her feet. She flinches, shuts her eyes, and feels with her fingertips the chill of the smooth silk.

She stumbles back to the room and picks a spot facing the window. With a swing of her arm, up the silk strip goes, around the wooden beam across the ceiling. She stands on a stool, ties the two ends of the strip together, and pauses.

As she watches the dancing petals, she imagines she is once again home.

For millions of years, the jade sleeps inside a green mountain, untouched. She is cocooned in the safety of the rocks around her, not yet found, shaped, or polished. She bears no significance, and shoulders no great desires or regrets. Before she is to be passed from hand to hand, country to country, generation to generation, she lies innocently in her shell, until one day an outsider’s ax rips her open.