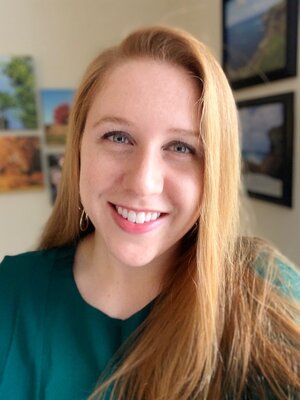 Claire Kortyna’s work appears or is forthcoming in The Offbeat, The Jellyfish Review, The Maine Review, Beyond Words, and others. Her essay “Lunar Musings” won Flyway: Journal of Writing and Environment’s Home Voices Contest. She is a nonfiction PhD candidate at the University of Cincinnati and has an MFA from Iowa State University. She reads for The Cincinnati Review and The Sewanee Writers’ Conference.

In 1518 an Italian princess is married away. She must leave behind Vigevano, her family’s ducal seat in Italy, just across the river from Milan. The princess blossomed here, at the epicenter of the renaissance, felt the seismic tremors of it radiating outward across Europe. She’s been studying mathematics, law, literature, history, Latin, theology, geography, science, music, more—and now she must travel far away—far from the blue-green banks of the Ticino and its wooded waterfalls, far from the rugged snow-capped peaks of the Swiss Alps, far from her teachers, famous Italian humanist philosophers, and far from her family’s court, which commissions Leonardo Da Vinci to paint The Last Supper in their family cathedral.

Her name is Bona Sforza. She is to be the second wife of Polish King Sigismund I the Old. She is smart and unafraid. She is going to bring Italy, and the Renaissance, with her to Kraków.

Witch!—the whispers of it haunt her court. Witch!—it digs clawed, resentful fingers into her reformation attempts. Witch! Witch! Witch!—Bona Sforza bears the yoke, undaunted. She is Queen, after all. She has King Sigismund in her pocket. The Renaissance comes to Poland.

With smooth strokes I drag my y-peeler along the dark-green rinds of the cucumbers. Ribbons curl away, revealing pale, wet celadon underneath. They stain chlorophyll across my cutting board. When they are naked, I take my knife—honed to razor sharpness just for this—and begin slicing. Each cucumber round should only be ever-so-slightly-thicker than paper-thin: a millimeter, maybe two. The slicing is time consuming, and an ache builds in my wrist. I clench my knife too tight in my fisted efforts at precision. When the cucumbers are all cut, I have a cascade of them, nearly translucent, tender as longing.

I am making mizería. I have made it many times.

Feeding handfuls through my fist like I’m dealing cards, I layer the rounds into a bowl and scatter flaked salt over each tier. A valley of green, a rainfall of white: repeat. I take a capful of white vinegar—a cap and a half—and drizzle it into the bowl. The smell of it, sharp-sour, makes the back of my tongue ache. It smells like heritage, like nostalgia, like all our most malodorous foods: golumpki, haluski, sauerkraut. It smells like rainbow-bright Easter eggs, pisanki, blown and painted with geometric flowers and proud-plumed roosters. But mostly, it smells like sorrow.

When Bona Sforza comes to Kraków, they serve her meat until her stomach churns. What happened to tender, juicy fruit? To olive oil and bright herbs? To fresh, crisp vegetables? Homesick, ill, she turns to her Italian chefs in desperation. They do what they can. They offer her this dish.

Mizería, she names it, meaning “misery” in Italian. Perhaps Bona Sforza laughs as she does this, perhaps she cries, or perhaps she savors it in silence. Maybe she eats it slowly on a bench by the vegetable plot she bid them build in the castle garden, waiting for familiar vegetables to sprout from foreign soil.

Włochy, is Polish for Italy. And so, włoszczyzna, is what becomes the Polish term for soup vegetables, stock base: carrots, leeks, and parsnips. It translates literally as “something from Italy” or “Italian stuff.”

To Kraków, Bona Sforza ushers in artists and sculptors, architects and philosophers. Wawel Castle is flooded with Italian influence. She brings tomatoes, cauliflower, artichokes, green beans. She introduces salad, as a concept. The Polish word for each of these is a palimpsest of its Italian origin. They hold fast the echo of her influence across time, despite how hard others tried to stamp it out. Witch!—they hate her. Too smart, too active, too female.

Their Queen delivers them renaissance, irradiates the vestiges of the Dark Ages. Her reign bears enlightenment, breathes freshness into the cuisine, guides the country into what historians will later dub the “Golden Age of Polish Culture.”

In her royal portraits, they purposefully portray her fatter and uglier than she was in truth.

I take the bowl from the refrigerator, where it sat for an hour as salt and vinegar worked the magic of their chemical process. In the colander, I crush cucumber against its sides, pressing to drain. Sometimes I use a spoon, sometimes a piece of paper towel, sometimes I sink my fist into the chilled wet, to feel the slick petals against my knuckles. You want to drain it just enough, too much and you lose the vinegar, the thread of sadness that binds the dish together.

The cucumbers are softened but still crisp. They collapse and fold on themselves, furled like new leaves. The hour in vinegar and salt acts as a sort of semi-pickling, a controlled decay. It teases in the mouth, both fresh and not fresh. My teeth relish each cool, crunching bite. My tongue mulls over the pleasing complexity of vinegar and sour cream. Sharp acid, milky sweetness, tart tang. Mizería, misery, cucumber sorrow—it’s named perfectly. It holds the very flavor of homesickness, the essence of loss.

I spoon myself a heaping, wistful bowl. I, too, know what it means to be displaced, and here in my cupped palms, I feel the truth of it, transformed into consumption.

King Sigismund I the Old is credited for the royal chapel of Wawel Cathedral, which scholars, architects, and historians voted the “most beautiful example of the Tuscan Renaissance north of the Alps.” It’s named “Sigismund’s Chapel,” as if the word “Tuscan” is an accident, as if he were somehow responsible for all of it. Witch!—they want her diminished.

They fawn over King Sigismund and his son—the last kings of the Jagiellonian dynasty, the glory of Poland. As if they were not her husband and her son, as if their “Golden Age of Culture” were not merely the effect of the Italian Renaissance on Poland, as if their greatness were not something she bore to them.

Nine years after King Sigismund dies, Bona Sforza returns to Italy at last, eager for home. Before the year is out, she is poisoned and murdered, on orders of King Phillip II of Spain. He doesn’t want to repay the loan she granted him and his court. Her daughter lays her body to rest in the Basilica San Nicola in Italy. This, at least, is an honor befitting one of the most important women of the 16th century. The Basilica is a pilgrimage site, perched on the cerulean shores of the Adriatic Sea.

Poland erects no monument to their Queen. They forget Bona Sforza for centuries, leave her mostly unmentioned in history and record, lose many of her belongings in the shuffle of time.

Witch!—they reduce her to a footnote amid their marvel of the Jagiellonian Kings.

But some things cannot be erased. Her gifts are woven into the legacy of language. Bona Sforza touches the mouth of every Polish speaker, an inheritance that permeates far deeper than any history-class lecture. Her influence reaches, immortal, across borders of time and country. It’s threaded into the traditions of their cultural cuisine. It even touches the tongues of those like me, for whom immigration is a distant, generational memory, who has only a handful of foreign words, like broken china, as the remnants of ancestral identity.

I eat my misery herbed with dill, grassy, subtle-sweet—my mother and grandmother do not. I have seen recipes that make their mizería thick, replacing sour cream with the protein-rich decadence of Greek yogurt, adding lemon or sugar, potatoes or mayonnaise. I understand this desire, to hearten the whole of it, warm it into something slightly different. I imagine these iterations must make for a scrumptious bellyful, must taste of summer. Elementally, mizería is only a half-step away from tzatziki, that popular Greek cucumber dip—rich and heavy, fat with shimmering swirls of olive oil. Tzatziki happily serves a crowd, scooped up in mouthfuls of Mediterranean-spiced pita, lushly colored wedges of bell pepper, carrots, and sugar snap peas.

Mizería is the lemon-bright abundance of tzatziki transmuted through grief. It’s melancholy after all, the nostalgia of joys past, diluted, pared down, soured—and it is delicious, just the same. I crave it often. Eat bowls of it, as my stomach twists in protest. I sit with Bona Sforza in her garden, and together we devour our sorrows until none are left.

“ One morning as a warm-up exercise, I made myself write about ‘taste.’ I immediately craved this dish and tumbled headlong into a research wormhole. Even though she was a queen hundreds of years ago, Bona Sforza’s story felt so deeply relatable that I became quickly obsessed. Who hasn’t felt homesick? Or silenced? Or lost? ”