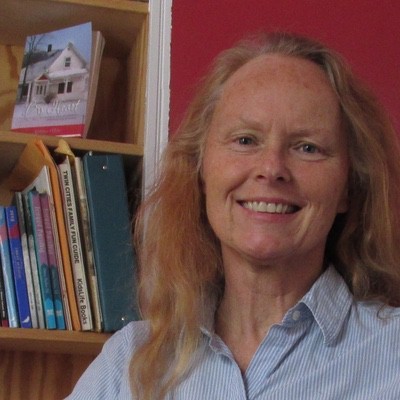 Kathleen Melin is the author of By Heart, a memoir of progressive education (Clover Valley Press, 2008). Her creative and journalistic work has appeared in national and international publications including EssayDaily; Feminist Parenting; A Woman’s Place; Dance, Somatics and Spiritualities; Eric Utne’s Cosmo DooGoods Urban Almanac; and others. Melin has worked in education as a teacher, presenter, and passionate advocate for people of all kinds and ages whose choices have been limited by class, gender, geography. She has taught at the University of Minnesota, University of Wisconsin, Summit School for the Arts, Wisconsin Indianhead Technical Institute, conferences, festivals, libraries, and farms. She lives on her ancestral farm in northwestern Wisconsin where she cultivates creativity and a garden. www.kathleenmelin.com/

All I Can Tell You

“Roy drove the death wagon that spring of 1919,” my grandmother said. “We’d been courting for a year.”

She lifted a china cup from her yellow kitchen table, scarred from rough use, and sipped boiled coffee. Half a donut dusted her saucer, powder-white, same color as her hair. I sat opposite, a sturdy granddaughter 11 years old, a plate of sweets between us.

That cold spring, the death wagon made rounds in the evening then headed to the cemetery for night burials. The prohibition on public gatherings meant the dead lay down quiet, without ritual or the good salt of graveside tears.

Small farms, 40 to 160 acres, patched the land, relatives and old-country relations on each one. An easy mile south from my grandparents' farm, Roy’s Uncle Dick and Aunt Lucy Hunter made a home for thirteen children. The square two-story house sheltered them. The prosperous farm fed them. They raised cattle, too, and sold them for two cents a pound to the stockyard in Saint Croix Falls.

In that river valley, a rough five-mile road away, citizens rolled up the pastoral backdrop and converted the Civic Auditorium to a temporary hospital. But the Hunters farmed up on the fertile plateau and made scant trips in that direction.

“Six of the family died in one week,” my grandmother said.

My grandmother, her young life thatched by tragedy, schooled me in death: stories of a 19-year-old cousin who crossed an ocean from Sweden in the spring and drowned in the river that fall, a young mother dead from tuberculosis, another from cancer, and her own mother’s final rest after 14 years of melancholia. But this story was new.

“The baby went first on April 7th, then Mary and John on April 9th. The mother, Lucy, followed on April 11th. George got on April 12th and Hugh the 13th.”

My young mind didn’t know a person could die of flu. It seemed so ordinary and every day, recurring and regular, not like the mumps, measles, and chickenpox that my brothers and I got and got over once and for all. In our childhoods, some still suffered polio, but for the most part, we drank the sweet liquid vaccine in a white paper cup to manage that.

“Neighbors helped with chores but didn’t go in the house, except for Dick’s oldest sister, Auntie Nichols. After a day of nursing, cooking, and cleaning, she’d wash with a mix of water and formaldehyde. Dr. Haseltine trundled over from Taylors Falls. He couldn’t do anything. Too late. Too much he didn’t know, no one knew. But it wasn’t over. Uncle Dick had cattle to bury, too. They’d died the same quick way.”

She swiped her index finger back and forth over her lips. Her pale blue eyes looked at a spot west of her cup. She stayed there for a long pause before she looked up.

“Roy and I waited a month before setting our wedding date. Varsågod,” she said—help yourself—and offered the serving dish with sweets. “But it still wasn’t over.”

That foolery. That certain self-deceit of thinking that death could be done. I, too, would learn the unexpected when it comes to death. But not yet. My girl-mind did not yet know, and so I asked: “What happened?”

“The death wagon shuddered into view along the open stretch from the corner,” she said. “Me and Roy were bound for marriage in one week—June 2, 1919. I ran toward him.”

I could imagine my thin grandmother, legs bowed by childhood rickets, making that smooth dash through the wooded front yard to the gravel road.

“He had a red bandana over his nose and mouth. ‘Stay back,’ he said. The handkerchief puffed as he spoke. A small body wrapped like a cocoon lay limp in the back of the wagon.”

“Aggie—ten years old. She was the only one to have a funeral. It stood in for all others—the mother, sisters, and brothers buried in the night. Roy and I attended. The next day, we got married.”

She nodded toward the sweets again.

Over the years, the remaining children left home. Uncle Dick, lonely and alone, would wander to my grandparents’ around supper time saying he’d already eaten, but joining them anyway. He’d stop at Carlson’s for checkers and weak jokes. In his final months, Frieda and Esther, spinster sisters after the man-scarcity of World War I, took him in. They sang hymns, recited Edgar Guest poetry, read the King James Bible, and Dick finally got a wagon ride twenty-two years after the flu.

In the gray late afternoon, I lope the hilly tangle of the Saint Croix Falls Cemetery, looking for their graves from that spring 101 years ago. I pass polished new stones in favor of those eroded by weather, marled and dull. Up and down the hills, across the buff grass, around bare trees showing their lace of branches, but I can’t find them. Dusk settles. I head toward the road and glance a modest slab, prism-shaped, lichened gold and moss greened over the chiseled name: Hunter Family.

In the bottom row, baby Lyle lies in the middle with two of his brothers and sisters on each side. In the top row, Lucy lies at one end and Aggie at the other. They’d planned ahead and saved the spot for Dick by Lucy.

But first, some sweets.

“ In the spring of 2020 as pandemic circled round again, I felt the near presence of uncertainty and powerlessness. Remembering the history of the 1918 influenza, how it touched this rural river valley, and the drama of this family story reassured me. There would be suffering, but we would come through it. Writing this piece reminded me how stories can teach and soothe. I’m grateful to the story-keepers who contributed to it—Clara Chinander, Maurine Melin, Marguerite Chinander, Rose Vezina Braatz—and to those who lived it. ”