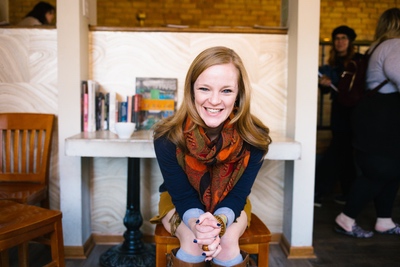 Ellie Roscher is the author of 12 Tiny Things (forthcoming), Play Like a Girl and How Coffee Saved My Life and hosts the Unlikely Conversations podcast. She teaches writing at The Loft Literary Center, theology at Bethlehem Lutheran Church and Peace Literacy at The Global Immersion Project. Through curious inquiry, commitment to the sacred ordinary and artistic collaboration, her work accompanies people to a more centered, whole, and embodied self. Ellie holds an MFA in Writing from Sarah Lawrence College and an MA in Theology from Luther Seminary. She lives in Minneapolis with her spouse and sons.

Each autumn, blooming chrysanthemums offer a final burst of color before the cold. China introduced the flower to Japan in the 8th century CE. The chrysanthemum, or kiku in Japanese, has since become a venerable flower synonymous with the essence and art of Japan, appearing on the crest of the imperial family and treated with a great sense of ceremony. Japanese gardeners cultivate young chrysanthemums, tediously training a single flower to become a manicured arrangement.

My teammates and I lined up along the back wall of the gym. We lay on the floor, legs up the wall, arms straight out to our sides, palms up. Shimmying our legs into a deep straddle, we settled in. The girl on my right strapped weights to her ankles. A coach sat at the head of another, pushing the balls of his feet into her thighs to straighten her legs. Eventually, with the help of gravity, my heels rested on the cold cement floor. I wiggled my toes and watched the muscles in my legs undulate. We differentiated pain that injures from pain necessary for progress. After several minutes, our coaches were satisfied. Some girls moaned and worked their legs back together, but I rolled over and hopped up. While we waited for the others, my coach refastened my ponytail higher on my head. She liked when it completed the upward diagonal of my cheekbones. In a whisper, she insisted, “These things matter.”

A high school classmate of mine was beaten to death by her boyfriend in the wintertime. I knew her as quiet and kind. The police found her body on the bed with no pants, her shirt pulled up and one boot on. She had bruised arms and scratches on her hands, and her face was covered with blood that seemed to come from her eyes, nose and mouth. Police found blood at the bottom of the stairs, on the second-floor landing, at the base of the bookshelf, and twelve inches from her head. She was an artist and took care of children. She weighed 95 pounds. I wonder if she realized at some point in the altercation that this is how it would end.

The New York Botanical Garden celebrates kiku with a Japanese imperial-style flower show. Teams of gardeners spend upwards of a year building wiring systems and training the flowers. One display resembles a cascading waterfall, paused for a moment in its kinetic flurry. Another mimics a layered, symmetrical cake standing stoic and static, a persuaded vision of perfection.

I pulled my hospital gown closer so the doctor could sit by my knees. She was slender and graceful. Her long black hair looked disheveled. I wondered how long she had been awake.

“I’m sorry we are meeting under these circumstances,” she said.

A few months into my pregnancy, I went into the doctor’s office for a routine checkup. An ultrasound showed an underdeveloped baby with no heartbeat. It had been dead inside of me for a month. My body would not let it go. Concerned about infection, the doctor asked if I was free the following day to remove it. I was.

“The procedure is simple,” the doctor continued. “We will put you to sleep, dilate your cervix, and apply light suction. Do you have any questions?”

I woke to the nurse shouting my name and shaking my shoulder. She handed me a small plastic bowl of graham crackers and a glass of apple juice. My teeth wouldn't stop chattering.

“It’s time to go,” she said. I rose gingerly, revealing a large pool of blood on the white bed linens.

A single white flower stands tall, strikingly pure. Rows and rows of thin petals bow in unison toward the nucleus like layers of delicate feathers resting. In Japan, white chrysanthemums symbolize adversity and grief. A few petals on the outermost layer gracefully unfurl in their own direction, wilting under the pressure to conform. An exhausted lunge, gasping for air. A choreographed lament.

“ As an adult, I enjoy exploring the layers of the intense gymnastics training of my childhood. Now, watching a prepubescent, muscle-bound girl flipping and twisting through the air, I am filled with awe and questions. It is beautiful, but is it natural? It is impressive, but is it healthy? The first time I witnessed and read about the art of contorting flowers, similar tension presented itself. Phrases like meticulously pinched and forced budding resonated in my chest and hooked onto my bones. I knew I wanted to foil kiku against my experience as a woman in the world. In ‘Kept Miniature in Size,’ I address beauty, power and trauma in the female body through the lens of training flowers. ”