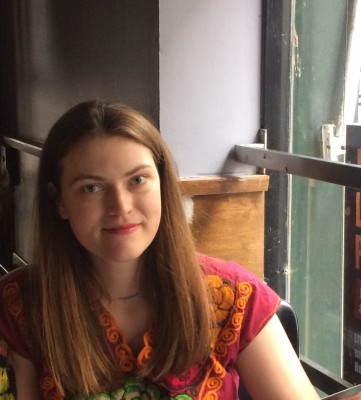 M.C. Williams’s writing has appeared in The Open Bar (Tin House) and The Journal of Microliterature, and has also made the Top 25 list in Glimmer Train’s Very Short Fiction Contest. She lives in New York and is working on her first novel. On rare occasions, she tweets @maryyywilliams.

In the Light We Became Children

We were two orphans hiding beneath the dinner table. We sat very still, our legs folded against our chests, careful not to touch the feet that surrounded us. Our family had been killed in The Great Battle and now we lived in the forest, leaving only to steal what we couldn’t make or find ourselves. We were waiting for the rich family to finish eating so we could take the leftovers and sneak away into the night.

The tablecloth was suddenly lifted and we drew back. But it was too late. We’d been seen.

“What are you two doing down there?”

It was the aunt. She laughed and said, “Look! Look at who I found under the table.”

We were called out and made to answer questions. How old were we now? What game were we playing?

“Pretend,” his mother answered for us.

“Is she his girlfriend?” His aunt asked, staring at me and touching my arm.

Her nails were bright pink and they smelled like chemicals. His aunt and uncle were visiting from the city and his mother had spent all day cooking and cleaning and telling us to play outside. His aunt smiled down at us. Her teeth were perfect and white but her lips were dry and stained with wine.

“No,” his mother said. “They’re best friends. She lives down the street, but she’s over here all the time. They’re always together.”

The adults resumed their conversation and his aunt released me. We ran to the stairs, where it was dark and quiet. We were orphans again. The heroes of our stories always were.

When the war started, we’d been captured and forced to work in the circus as acrobats. But we’d escaped and now we could scamper up a tree and swing from branch to branch, clasping each other’s hands and soaring in through the open windows of dark houses, where we stole supplies for ourselves and for the tigers we’d taken with us when we left the circus. At night we slept in our tree house and the tigers curled up around the trunk and purred.

We crept into the kitchen and grabbed a bag of potato chips. We heard someone approaching and dashed back to the staircase. We stood against the wall and watched a solitary shadow move across the threshold.

If we were caught, we might be handed over to the orphanage or worse. This was wartime and there was no telling what would happen to children caught stealing.

We crept up the stairs and by the time his mother poked her head around the corner, we were gone.

Upstairs it was too dark and too quiet. I whispered that I was afraid of the monsters that live in the darkest parts of the shadows. He gripped my hand.

“We are the shadow monsters,” he said.

And so we discovered that we had the ability to transform into monsters and travel from shadow to shadow. If anyone entered our shadow we swallowed him up forever. In the light we became children again.

He emptied his school backpack and we put the potato chips inside, along with a blanket, and tried to think of what else we needed. I had already procured one weapon for us. It was a pocketknife that had been taken from the back of a drawer. There were many odd little tools on it but the only one that interested us was the blade.

But that was in my house and he promised that there was an even better weapon in his parent’s closet. From behind the suits he took out a box and there it was—sleek and black and small. We took turns holding it. We agreed that we would take it, that it was much better than the knife. I aimed it at myself in the mirror and whispered, “Pow.”

A noise on the stairs startled us both. We lay flat on the ground. We didn’t move. We didn’t even breathe. We became a shadow monster. Someone passed by and went into the bathroom. We crawled behind the bed and I held the gun above my shoulder. We waited.

The toilet flushed. The hall was flooded with light and then darkness fell again. We heard someone stop at the door.

“Come out, children,” a voice called.

It was his uncle. We watched him from the darkness. He seemed to sway in the doorway. A moment later he left and we heard his footsteps on the stairs. We put the gun in the backpack and when we went into the hallway, his mother was waiting for us.

“There you are,” she said. “You two should be getting ready for bed.”

We screamed until she said we could have a bath first. We agreed, as long as she did not come with us.

As soon as she filled up the tub and left, we dropped the backpack, tore off our clothes, and jumped in. I climbed out to turn off the lights, leaving only the hazy blue glow of the nightlight.

We’d been caught and the family had decided to clean us up and sell us. They didn’t know, of course, that we were already planning our escape.

We unscrewed the tub’s drain and crawled through the pipes. We came out in an underground cave, lit by a glowing crystal, and we swam in a pool beside a waterfall. There were baby water-dragons in the depths of the pool. They nuzzled against our hands like kittens. We pushed the dark water back and forth between us and felt more certain than ever of the hidden world that truly existed if only we could pretend a little longer, believe a little more. We could see it at the edges of our vision and thought we could stay forever if we didn’t turn our heads and look right at it.

The door opened and the light flicked on.

“What are you doing in the dark?”

We blinked up at the adults. They were all there: his mother, his father, his aunt, and his uncle, staring down at us. They smelled like alcohol and coffee.

“They’re playing instead of getting clean,” someone said, and they all laughed and stared.

Neither of us spoke.

His father took the potato chips and the blanket out of the backpack and the adults laughed. He opened the backpack wider and peered into it.

“Take a look at this!” he said, lifting up the gun, which was now a shiny, black shoe, and they laughed even harder.

His mother made us take turns standing as she scrubbed our bodies with soap and the rest of them watched. The adults stared and laughed. We could still hear them laughing after his mother led them away and shut the door. The light was left on. We were left in the harsh brightness, naked and wet, unable to look at one another.

“ I often find myself writing about the inner drama of childhood and the worlds that children create for themselves. This story comes out of my own memories of playing 'pretend' at family parties, where interrupting adults sometimes felt like the true villains. ”