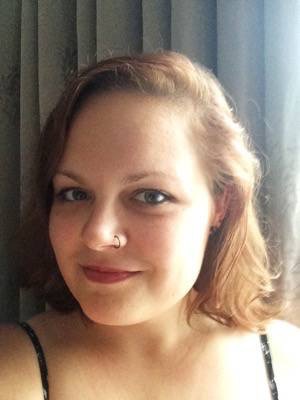 Kathryn McMahon is an American writer living abroad with her wife and dog. Her fiction has appeared or is forthcoming in (b)OINK, Split Lip, Jellyfish Review, Crack the Spine, Psychopomp, The Citron Review, and Necessary Fiction, among others. More of her writing can be found at darkandsparklystories.com. She tweets as @katoscope.

It’s Too Hot for Flannel

Hank drives Tiff to the clinic near the lake because her mosquito bites need epic attention, particularly the one below her left eyebrow which has swollen the lid shut. The bites do not look like bites, but like cigar burns warring over her body. There must be two dozen on her arms alone. She’d been lying topless in the bed of their truck to get a little sun and prove she’d been on vacation. So what if he’d been pitching the tent? He knows how allergic she is. He didn’t wake her up after she’d fallen asleep and look what happened. Now she has a fat lip. This is totally his fault. She spits a little when she says it.

The doctor’s office is not particularly crowded because it is early June and most of the tourists haven’t arrived yet for their boating accidents or campfire burns. Tiff is limping because of a bite on the arch of her foot, so he helps her into the waiting room and finds a chair under the determined rattle of the air conditioner for her to groan into. By draping herself sideways, she monopolizes the current. But she clearly needs it. Her legs have been scratched purple and she offers bleeding arms up to the vent.

When Hank sits and his chair knocks into hers, she yelps. “Idiot.”

Should he ask if she wants her hair pulled back? But she might scream again like she did when he helped her get dressed, so instead of offering, he traces whorls in the carpet with his sneaker. This is not the first time they’ve gone to an ER together, though this particular one is new. Last time was for stitches. An accident.

Out of the corner of his eye Hank sees the nurses studying him. He knows what they’re wondering. Why are his eyes fidgety? Is that guilt making him tap his foot? It’s obvious when they stare at his hands that they are checking his knuckles for bruises.

He is not an asshole. He is glad they care, even here, even if they wouldn’t be able to do much to help. Even if it embarrasses him. Cuff buttons dig into his wrists as Hank squeezes the armrest ready for someone to ask him outright if he’s hurt Tiff.

But he is only instructed to wait while a nurse takes Tiff down a short corridor. The examination room lacks soundproofing and he hears Tiff explain the severity of her allergy and request hydrocortisone and antihistamines. But even here by the lake they aren’t used to people with such pronounced reactions. When the nurse asks if there’s anything else she wants to talk about, Tiff’s denials slip under the door. Anything at all? Then, finally, “Has he ever touched you in anger?”

Hank slides so far down into the chair that his beard blends into the chest hair poking out of his collar. Jesus, does this place need carpeting. They really ought to ensure the privacy of their patients. How many women have they put at risk this way?

He can picture the amused tilt of her head when Tiff says, “Look at the holes, the pus. My fiancé isn’t beating me, believe me. I’d lay him flat if he tried.”

A chuckle of relief scuttles down the corridor. When the doctor suggests that Tiff use a repellant with a higher concentration of DEET, she flirt-giggles in agreement. The door opens and she sashays out waving a prescription at Hank. With one eye still puffed shut it looks like she’s winking.

“Get up. You look ridiculous.” She puts her hands on her hips and juts out her chin.

He used to tell his friends that he found it adorable the way she cared for him. Now, he just listens, standing and straightening his shirt, heavy with sweat. He wants to like camping, but it hasn’t been easy. Then again, aren’t difficult things supposed to be worthwhile if you stick with them long enough?

“Ugh, you’re drenched.” Tiff tugs his elbow and his palm grazes a spot on his ribs, a spot tender from stitches, from knuckles, from a ring his pocket aches to get back.

“ This story was inspired by something I witnessed between two people. Domestic violence is an insidious problem that can come from any direction in a relationship, and I was caught by how someone could recognize it happening to others but not to themselves. How it might stay hidden, explained away. This is a gendered narrative that goes beyond gender. ”