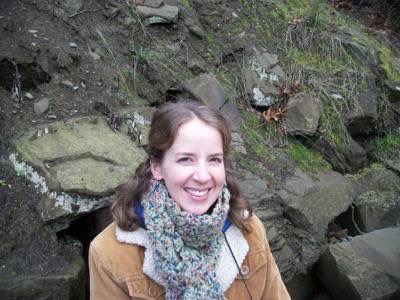 Dayna Patterson received her MFA from Western Washington University. She is a former Managing Editor of Bellingham Review, Poetry Editor for Exponent II Magazine, and Founding Editor-in-Chief of Psaltery & Lyre. Her poetry has appeared or is forthcoming in The American Journal of Poetry, Hotel Amerika, North American Review, The Fourth River, Literary Mama, Sugar House Review, Weave, and others. www.psalteryandlyre.org

Let’s say she dives in to see the eels, their glistening coils,
and finds her gills. Let’s say she spies a window to self-
preservation, decides to still, pales

for her funeral, allows limbs to deadweight atop her bier
all the long way to the graveyard. She’s careful
not to flutter the sheer linen with breathing, soundless,

in her hibernation, as the men protest over who loved her
most. She lets her cold blood soak up earth’s chill.
Then, after rain, she surfaces through muddy layers,

awakes from her torpor, shedding shroud like a skin,
up into the sky’s blue burn. She migrates, arrives
at the overwintering place, away from Denmark, away

from Hamlet, away from the proddings of her father’s
ghost and her brother’s commandments.
(Thou shalt. Thoushalt. Thous halt.)

She renames herself Lia—bearer of good news, of good
nows. Free, she studies: Botanical phonemes. Floral linguistics.
The quiet of plants interspeaking, their instant messaging.

Here, she lays claim to the under-
story. Hers a glassy stream to swim, a mossery
to lie down in. Hers a mouthful of forest floor

and worm and lichen and sap. See her with algae
scooped in her palm, a jeweler’s glass
hitched to her eye.

A nonesuch nunnery of green.

“ When we watch Hamlet, our rational minds know the outcome will be the same—almost everyone will be caught in tragedy's steel trap mouth, but that doesn't stop our emotional cores from willing a different outcome each time the curtains part. If the multiverse hypothesis is accurate, there's a version of the play in some dimension or other in which Ophelia does, surely, make her way out of the maw and into a sanctuary of her own choosing. ”