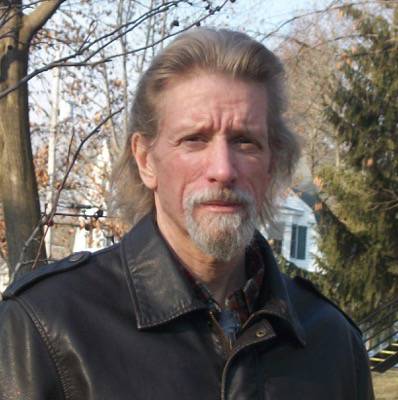 Gregory Wolos’s short fiction has recently appeared or is forthcoming in Post Road, Nashville Review, A-Minor Magazine, JMWW, Yemassee, The Baltimore Review, The Madison Review, T. J. Eckleburg Review, The Los Angeles Review, PANK, A cappella Zoo, Superstition Review, and many other print and online journals and anthologies. His stories have earned five Pushcart Prize nominations, and story collections have been named as finalists for the 2010 and 2012 Flannery O’Connor Short Fiction Award and the 2015 Serena McDonald Kennedy Award (Snake Nation Press). Gregory’s stories have won competitions sponsored by the Rubery Book Awards, Gulf Stream, and New South. He lives and writes in upstate New York on the bank of the Mohawk River. For full lists of his publications and commendations, visit www.gregorywolos.com.

He’s proud of the diorama concealed in the back of his tractor trailer. Is it art? Maybe. It’s got to be something more than the stolen contents of a brother’s apartment.

He’s stuck in traffic now, stopped dead between Boston and Springfield in an eastbound lane of the Mass Pike. People are getting out of their cars and trucks, peering over vehicles lined up as far as the eye can see. And across the median the westbound lanes are empty enough for touch football or a picnic: Whatever happened ahead is bad enough to have stopped the flow of traffic in both directions.

Next to him on the passenger seat sits Puck, the little poodle mix he took from the apartment along with the furniture. The dog’s giving him the eye, and he slaps his knee, though he knows Puck’s too old and timid to make the leap over the gear shift box. He picks up the dog, leashes it, tucks it under his arm, and swings out of his truck’s door onto pavement rubbed shiny by millions of tires—but his boots are probably the first to touch this exact spot. The smells of asphalt and exhaust rise through the cool March air. Puck tugs like a fish too small to keep, making for the dirty snow on the highway’s shoulder. A girl with a blond ponytail pokes her crimped face out of the driver’s side window of the car they’re behind.

He shakes his head, unprepared to speak. The dog scrapes at the pavement, eager for the snow. “Nope,” he says. “Nothing on the radio. Got an iPhone?”

“It’s out of power, and I don’t have a car-charger,” the girl whines, like a kid who has yet to learn about real trouble. She yanks her head back into her car without another word. He notices the college sticker, “Framingham State University,” on her rear window and guesses that she’s late for class, then squints up and down the highway at the sun-glared roofs and windshields. Everybody is missing something. He follows Puck to a crust of snow and watches the dog squat. If the young woman were to join him at the rear of the truck, her face would uncrimp when he revealed the diorama. She’d forget about missing whatever she’s missing and lift a hand to her open mouth. She’d insist that he invite the multitudes stranded on the highway to behold the display.

Puck finishes, and he leads the dog to the back of the trailer where he stands and stares at the roll-down door as if he’s penetrating it with X-ray vision. He reads the phone number printed after the question, “How’s My Driving?” He knows the number has been disconnected because he’s tried it.

The diorama replicates the brother’s apartment as seen for the last time before it was emptied. He considers the contents repossessed, since most of it originally belonged to his parents. It’s furniture he grew up with. He’s never seen the old dioramas from the natural history museums, but he’s heard about them—how they’re full of dead animals shot long ago in Africa—antelopes and rhinos and wild dogs. He’s heard that behind the panes of dusty glass you can see hundred-year-old bullet holes in some of the stuffed carcasses. There aren’t any bullet holes in any of the furniture laid out in the back of this truck, but would it be so surprising if there were? Puck is sitting on the asphalt, showing a pink tongue the size of a postage stamp. If dioramas included living things, maybe the dog should be in it, curled up on the rug his mother spent decades braiding out of clothes her kids had outgrown.

There’s a tall bookcase in the diorama, its shelves jammed with familiar paperbacks. Beside the bookcase is a formica-topped kitchen table he and the brother had sat at for thousands of childhood breakfasts. On the table are a few liquor bottles and shot glasses, super-glued into place so they won’t roll off when the truck turns corners or bounces through potholes. One of the bottles is filled with water to look like vodka, another with tea to look like whiskey. Also on the table is a yellow legal pad, its wrinkled pages covered with writing.

He’d considered hanging framed apology-letters on the inner walls of the truck behind the furniture, but that would have been inauthentic: a diorama should represent a creature’s natural habitat, and an abuser attempting recovery would have mailed his apology letters out, not displayed them. Then he’d had the idea of filling a legal pad with rough drafts of apology letters that he could leave on the table as part of the display. He’d used a template:

I am writing to you today because I am making amends to people I have harmed as a result of my addiction to {substance}. Specifically, I know that I harmed you by {state action}. For this, I am deeply sorry.

I know that sometimes apologies are more of a burden than a blessing, but I would like the chance to apologize to you in person. This will allow us to discuss how I harmed you and what I can do to make things right. If you do not feel that you wish to forgive me, or you do not wish to have any contact with me, I understand. However, please know that I am deeply sorry for what I have done to you and would like to do whatever I can to repair our relationship.

If you would find it acceptable for me to make amends in person, please contact me at {phone/email}. Otherwise, rest assured that this letter will be my only attempt to contact you, because I do not wish to impose on your life.

As he copied the template letter, inserting “alcohol and drugs” for “substance” and “irresponsible behavior” for “action,” he didn’t try to imitate the brother’s handwriting. He addressed the first letter in the pad to himself. Hadn’t he been the biggest victim? The next two letters went to “Mom” and to “Dad,” separate letters that could have been sent in a single envelope. Three letters didn’t seem like enough, so he’d kept going. He composed the next for his own ex-wife, and then one to his daughter, who must be old enough to read by now. They’d been victims, too. These two letters would never have been sent, since the brother wouldn’t have had any more idea of the address than he did.

At the last moment, to fill the pad, he’d added one final letter—an apology to the dog. It must have been unsettling to have been snatched out of the apartment by someone you weren’t sure you could trust, even if his scent was familiar. He’d signed this last letter with his own name, and only now, standing at the back of his closed truck, leash in hand, does he wonder whose signature he’d used to close all the other apologies.

He’s dozing behind the wheel—traffic hasn’t budged for an hour—and wakes to find the dog gazing at him with eyes like chocolate chips. He’s been dreaming of the family furniture fallen into disrepair under the brother’s care: the table supporting the bottles and legal pad full of apologies is scarred and warped; the sofa he and the brother had shared for Saturday morning cartoons now leaks stuffing and smells of kitchen grease. He’s absorbed that smell, having slept on the sofa for countless nights since he’s begun transporting the diorama.

He dreamt of the photograph of his uniformed uncle, his mother’s brother, hanging now in the diorama behind the sofa. He’d never known the young soldier, who’d barely been out of his teens when he’d died “on foreign soil.” His mother said she saw him in her children. “God gave me back the brother he took when he gave me you,” she told them. “A brother means everything.”

But in his dream on the Mass Pike, he’s seen something else on the wall of the diorama, dwarfing the photo of the dead uncle: his own tattooed flesh, stripped off his body in a single piece and hung like an animal hide. The sight of his stretched skin lingers—he feels a hot knife pierce his ribcage, sees himself peeled from himself like wet linen. What if the brother on some lonely evening had woken from troubled sleep to find that skin stretched out on the wall, its tattoos as purple as bruises and as indecipherable as hieroglyphics? What if the brother pulled the skin from the wall and wrapped himself in it?

He winces from the bright sunlight, and, hoisting Puck to his lap, laces his fingers like a collar around the dog’s neck. There are tattoos of musical notes on his knuckles, but he’s unable to remember why he chose them—he doesn’t play an instrument and can’t read music. Maybe they’re the sound of a punch. Maybe they begin a melody for the diorama.

He releases Puck’s throat, cups a palm over the dog’s head, and shifts his attention to the car in front of him. “Framingham State University,” he reads aloud. Someday his daughter will be as old as the young woman with the drained cellphone, and maybe she’ll go to college. By then she’ll have made up a history that explains her absent father. If he finds her and her mother, he’ll show them the diorama he travels with. He’ll give them as much time as they need to study it. On the beat up table, between the liquor bottles and pad full of apologies, there is a stale, pink-iced donut. He’ll tell his daughter to take it, not for eating, but because it’s pretty and once was something. “This is yours,” he’ll say, as if to remind her of an event she’s forgotten.

When traffic moves—when traffic moves again, he’ll continue on to the towns south of Boston. He’ll look for the cemetery where his parents rest and back his truck up to the stones engraved with their names and dates. He’ll raise the door with the “How’s My Driving” number and show them the diorama that displays their son’s history. “Come and see your boy,” he’ll shout at the monuments. “Read the letters on the pad. Look at the bottles on the table and the flesh hanging on the wall.” Then he’ll hold up his fist and turn it slowly like a globe and listen for its music, hoping it will tell him where to take the brother’s story next.

“ ‘Diorama’ is one of a set of linked stories I’ve been working on after having been trapped in a three hour traffic jam on the Massachusetts Turnpike last March. The circumstances (the cause, as the central character in ‘Diorama’ suspects, turned out to be a horrendous accident with multiple fatalities) proved fertile ground for a trapped writer who, like Kafka, sees fiction as ‘an ice ax to break the frozen sea inside us.’ The nerves of the drivers stuck in my ‘neighborhood’ of the highway were strained by unanswered questions, both practical and existential. There was a truck driver beside me who took his little dog for a walk . . . and ‘Diorama’ was born. ”