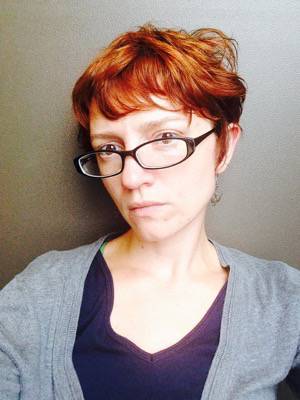 Spell for the End of Grief

No incantations, no rosemary and statice,
no keening women in grim dresses.
No cauldrons, no candles, no hickory wands.
No honey and chocolate, no sticky buns.
No peonies and carnations, no handkerchiefs.
No dark and lusty liaisons.

Only you and me to see it out.
Sweet self, let me wash your toes,
brush your hair, let me rock you gently.
Together we’ll change the sheets
and I’ll pull you to me, little spoon.
You be the marrow, I’ll be the bone.

“ ‘Spell for the End of Grief’ emerged during (surprise!) a time of grief. I was being hard on myself, and overwhelmed by the mistakes I’d made that led to the grief and losses I was experiencing. Instead of punishing myself, I tried to reimagine myself as my own caretaker, which turned out to be quite a healing process. ”

I knew this ellipsis among coneflowers wouldn’t cure me.
Though I collected its green-white doorknobs,
though it nodded enthusiastically about light,

if I sucked its taproot after a bite, I’d still unclot
and cool like those tuberculosis patients
who once sought the “healing air” of Mammoth Cave.
Paraffin, spotty coughs, soft footsteps punctuating the dark—

beneath every prairie is another prairie.
Parsed of color, roots like nesting vipers,
it threads through fungi a pale network,
whose velvet and dew crumbles in my fingers.

Loam whets the air. A borer moth clamps
a Rattlesnake Master’s stalk, shooting alerts
through root-webs; poison rises in spines.
I imagine a braid through the dark—

those TB patients holding hands—last becoming first
as he wades toward—they are certain—that mouth
where daylight lolls like a tongue.

“ ‘Rattlesnake Master’ is part of a series of poems encountering prairie plants native to the American midwest. As a girl who grew up on a farm, I loved all the wild things growing in the ditches and pastures I explored, but never knew their names; this poem and the rest of the series is my way of making up for that. ”