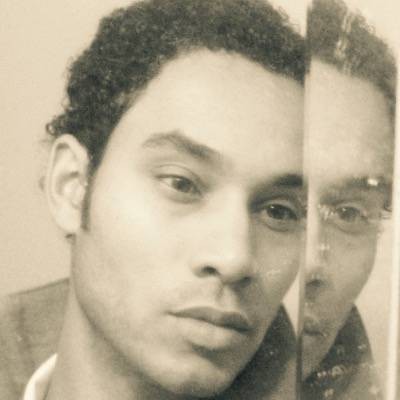 Adam Carpenter loves writing like a fat kid loves cake. He teaches English, produces music, and is one-half of the band Yacht Party. Most of his work is sonic and has been featured on radio stations from Boston to the UK and in various venues in the Northeast United States. His writing can be found, well, here, at The Baltimore Review and in the margins of the papers of his patient AP Lit students.

They cuffed her again while she signed her name to the list of her belongings. A roll of ankle tape (half-depleted), a pair of Nike Overplay’s (black), spare laces (black), backpack, a collection of Anne Sexton, a Swiss Army Knife. The booking area was grey with forest green accents. The other cop was texting someone and smirking. She snuck a glance. Ew. His girlfriend did not look good in a bikini.

The silence in a booking area is leathery. It's a sticky, miasmic vacuum. A parched desert of sound lustily thirsting for something other than the cluck-clop of the best shoes $58,067 a year can buy. The TV, had it not been muted, would’ve been the perfect backdrop as the news anchor pretended to look even more excited than he was above the scrolling headline, “College-bound Southie High honors student arrested for attempted mur . . .”

Her mom always said, “Cawps work hahd,” followed by the Bostonian semi-colon of pursed lips and a silent snort; then the inevitable, “They don’t get paid enough. F’gawdsakes.” Even when her older sister got arrested for the Craigslist thing, and the cawp pushed her head into the cruisah with a “watch y’head, sweethaht” while checking out the rise of her miniskirt, mummy just said, “they work so hahd.” #smh

The pea stew-thick silence made it hard to breath. A joke. A sexting crack? Nah, too soon. A yo mamma joke? Nah, both of these cops are white. But not Southie-white. They won't get it. The one who put the cuffs on was the kinda cop who tried to be nice. He tried to pretend he wasn't next to someone who had just asphyxiated her physics teacher. With a rope purchased at Home Depot for $23.97 cash.

What he said next was an alley-oop. Even if she weren't looking for a joke opportunity—even if she were mad about the nail she broke off in her physics teacher's neck and not in the mood to talk at all while being processed for jail—his slow, easy lob off the backboard would've yanked her out of silence with a whiplashing, noose-snapping yoink. Here’s what he said: "Lemme know if the cuffs are too tight." She blinked to give him a chance to awkwardly take it back. He just glanced up at her, looking for a response. Her face exploded into the same smile she's had since she was five years old. All teeth. She paused for effect, then grabbed the ball and cocked it back over her head.

But then she paused, unable, for some reason, to slam it home.

The fat cop on his phone grabbed the rebound and kissed it off the glass. "That's what she said." She glared at him. “What?” he chuckled to his buddy, “did I offend ah little engineeah?”

Five minutes earlier, at 7:01, wearing her new connected bracelets in the back of the police car, she observed an irony: her sister, the Internet whore, might have sat in the same car wearing the same bracelets. Why hadn’t she just snitched her way out? What was she so afraid of? But whatever, cuz she’d gotten’m back. Could that be a defense strategy? Momentary insanity? She made a mental note to Google that.

Six minutes before that, at 6:55, she wondered if the bleachers incident was in the police’s records. She pictured the text of the report: Suspect assaulted classmate claiming classmate called her “trailer park.” Victim pushed into gym bleachers. Shin broken. Fourteen stitches.

That same evening, Sunday at 6:47 pm, she checked her Instagram on her way upstairs to get her coat, and her pic already had 7 likes. One was from Keith Motley, the guy who liked her from English class, and one was from her ex- who refused to leave her alone. So that made it six legit likes and one extra. Her mother was asking the officer if he wanted something to drink. She didn't cry the way she had when her sister had been arrested. Weird.

That same evening, at 6:46 pm, a cop car pulled up to their apartment building, its front tire popping what sounded like a half-filled 20-ounce soda bottle. She peeked out the window in time to see the second cop kick a rusty can out of his way as he flicked the strap off the top of his holster.

That same evening, Sunday at 6:44 pm, she cropped a selfie, decided on no filter, and posted it to IG without a caption.

On Sunday at 6:43 pm, she took a selfie in front of the bay window of her house with the blue lights of the cop car pulling up in the background. #smuglife

On Saturday, the day before, at 7:07 pm, the lab results came back with a positive DNA match from the fragment of real nail that tore off when her falsie snapped off in her teacher's neck.

Friday at 3:17 p.m. She got off the bus and called her father's college roommate who was a lawyer.

Friday at 3:15 p.m. she thought maybe he didn't die. Shoot. That means he'd snitch. She cut her hair a few inches and put it up with an elastic. #ponytailforjail

Thursday, at 7:27 pm, she woke up on the damp grass with a sore finger on 87 North Oak St. in Somerville, Massachusetts. She had blacked out and fallen off the chair.

Thursday at 7:25 pm, she grabbed him by the neck with one hand, just beneath the rope, and squeezed as tightly as she could, glaring directly into his bulging, twitching, bloodshot eyeballs, only blinking to avoid the spattering froth foaming then flying off his flapping stuttering thin lips and scraggly beard. Without knowing why, she found herself hissing in a silent scream, calling him everything she could think of and sputtering threats she had just fulfilled and the phrase "ever again" kept spilling out and “my sister” and she didn't cry at all because it didn't hurt at all in any way and her father was right all men are dogs and her little brother must never know and . . .

Thursday at 7:24 pm, she screwed the pulley—with the Home Depot rope that cost too much already in it with a noose at one end and knot in the other—into the lowest branch on the tree in his back yard by stepping up on a chair. Then she put the noose around his neck and tightened it. Because a pulley effectively divides the weight of what's on the other end in half, she could hoist him up if she put all her weight into it. Effort equals load divided by mechanical advantage. He was passed out, so he wouldn't fight. He stunk of vodka and sweat. She had put her shirt back on but not buttoned it all the way because she was still a little drunk and a lot nervous. His back yard was black and only the half moon provided any light. At first, as the top half of his body came up, it was a really easy pull, but as more of his weight left the ground, it got harder and harder. But she did it and tied the rope around the trunk of the tree so he would dangle. Then he started to twitch, and that made her mad, so she got up on the chair she brought down and got in his face.

At 7:17 pm, she threw back her fifth shot, and he threw back his fifteenth. "A real man can drink three times what a woman can, never mind a high schooler." She checked her skirt, making sure it was convincingly crooked. Then she lied and said she wanted to continue the night under moonlight. He said he was too drunk to get up. She sweetened the deal with a pouty face and a promise to give him a lap dance outside. He was too drunk and perverted to question it—never mind be the first man in history to turn down a lap dance.

At 4:32 pm that Thursday, she arrived at his house for their "study session" with a bottle of vodka.

Wednesday afternoon, she told her parents she had a study date and went to Home Depot instead. But before that, she parked two blocks from his house, walked down his street casually, tiptoed around the neat hedges of his neighbor's house, climbed his fence, skulked between his perfect forsythias, and saw the tree. Before that, she told him she had thought about what he had said, and he was right. But moreover, she hadn't even threatened that. She was just shocked when he made his move. It wasn't a problem at all. And would he mind helping her with some physics at his house Thursday. He said, "That's tomorrow." She said ditzilly, "Oh, right, derrr," then, looking into his eyes, "So you wanna?"

The day before that, he brought her into his room again. She was shaking. He said if she ever told, no one would believe her, and her name would be in the papers for months. And plus, she had no evidence. She was silent.

The day before that, while she was asking for help on review question number 16 in chapter three, section four, he put his left hand on her lower back so she couldn't move, huskily whispered, “Say hi to your sister,” then slipped his other hand up her skirt.

“ From the author’s perspective, #ponytailforjail is about the power of negative cycles and the superpowers of those with the courage to break free. It also illustrates the abuse of these powers. The protagonist is modeled loosely after what the MC Charlie Baltimore could have been if she were more like Rakim and less like Kim. ”