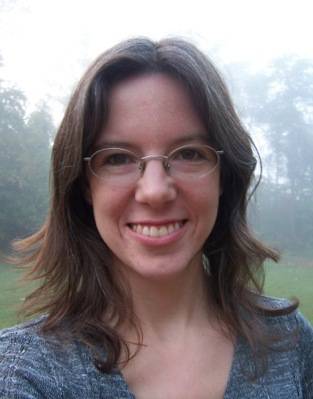 Sharon Rawlette lives in Virginia’s Northern Neck, 20 miles from the hospital where she was born. She holds a PhD in philosophy from New York University, and her essays have appeared or are forthcoming in Salon, Orion, and Brevity’s Nonfiction Blog. You can find her online at sharonrawlette.wordpress.com.

It’s seven a.m., and we’re sitting in the living room drinking our Sunday morning coffee when the cop cars pull up. You have your back to the window in your favorite chair. The one from which you watch all your football games and DIY shows. The one my parents gave us as a wedding present three months ago. I’m on the couch facing you. Facing the window when they arrive. One. Two. Three four. Spraying gravel as they skid to a stop in our country driveway.

“Honey . . .,” I say, and lift a stunned finger towards the window as four officers jump out and two of them, shotguns in hand, start to circle the house. This is one of those moments in which I know that one of two things is true: either there’s been a huge mistake or my life is about to change irrevocably. Possibly both.

As you turn your head to look, I’m back at that night when we awoke to flashing lights outside the bedroom of our old house. You went to investigate while I stayed frozen under the sheets, unwilling to move a muscle. My hearing heightened by fear, I could make out the low sounds of your conversation with another man. Your voices were calm. But then there was the sound of machinery groaning. Clanking. Cranking. Finally, you came back into the house. You sat on the edge of the bed, hands on your knees. “They’re towing my truck,” you said. Apparently, there was a lien on it we didn’t know about. It took us five hundred dollars and a day of bureaucratic hell to get it back. Now, I think maybe the pickup we just bought two weeks ago is stolen property. Even though the guy we bought it from seemed nice enough. He said he had kids.

You’re still in the process of turning towards the window, just beginning to get a peripheral on our visitors, when I’m already onto a second, more terrifying scenario. A scenario in which the cops are not coming for our vehicle, they’re coming for you.

We got married quickly. After less than a year. Didn’t that book say you couldn’t really know someone in under eighteen months? Here we are just scraping seventeen. Maybe these cops are about to reveal your secret life.

I know things can change this quickly. I know that this is how the biggest, most terrible changes always happen. With the man I loved before you, it was a telephone call received in a hotel bathroom. “I can’t marry you,” he said, and sent me sinking to the blue tile floor. After nine years. Maybe the eighteen-month rule isn’t so foolproof. Do I have to wait nine years to be sure you’ll never turn out to be someone other than the man I rely on you to be?

“What the—,” you say, when your eyes finally focus on the cop cars. You, unlike me, head immediately for the front door.

I stand just behind you, peering around your shoulder, trying to shove the dog back with my leg as two police officers make their way up our cracked concrete sidewalk.

“Hey, Mark,” you say. It’s news to me you know a police officer in our county. Good news, I think. “What’s going on?”

Mark recognizes you, and relaxes.

I relax. Of course you’re not the guy he’s after. You’re my husband.

“We’re looking for T.K.,” Mark explains. The sheriff’s office in the next county over gave them our address.

I sit on the couch while you open all the closets for them. You tell me later that, when you open the back door to show them the deck, you’re startled by a gun barrel six inches from your face.

One of the officers comes back into the living room. “Not who you were expecting on your front porch this morning, are we?” he says good-naturedly. “No,” I respond, and manage a laugh. I’m wondering if you, too, had a split-second when you asked yourself if there were crucial—felonious—things you didn’t know about me.

“ I wrote this essay the morning after the event it describes. Meaning, first of all, that the dialogue (minimal though it is) is accurate almost word for word. Not that that makes a huge difference to the reader, but it does set this piece apart from a lot of the memoir I’ve written, which has only made it to the page weeks, months, or years after the fact. What’s more important, I think, is that my perception of the event as recorded here was minimally influenced by the passage of time. This piece captures my precise train of thought in those few seconds when I saw the police cars approaching the house. It is thoroughly ‘in the moment,’ which is one reason I chose to stick with the present tense even though I know there are those who find it irksome! ”