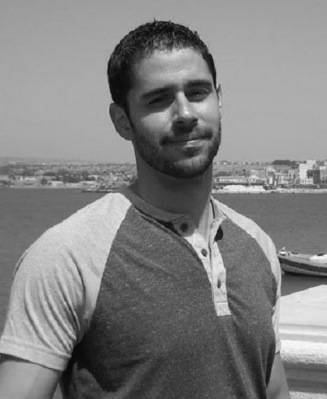 Michael Trocchia is the author of The Fatherlands(MPP 2014) and the forthcoming collection of poems Unfounded (FutureCycle 2015). His poems and prose have appeared in journals such as Asheville Poetry Review, The Boiler, Camera Obscura, and Mid-American Review. Work is forthcoming in Heavy Feather Review and The Worcester Review.

How to Make a Thing to Believe in

Start with a landscape. Dress the field with sun and dew. Put a wily man in it. Put him between the horizon and the river rushing by in the foreground. Have his back to you. Okay. Now take away the landscape. Spin him around. Fill the space around the man with the interior of a subway car. Slap a flat cap on his head. Have the man riding along, his chin jutting out. Have other passengers riding along. Now take out the man and put him aside for now. Pick any passenger with a mustache. And follow his commute. Follow him out of the train, up the grimy stairs, and onto the street. Have it so he smells the smells of damned streets. Have it so you follow him into a café. See him go to a table; see him see the other customers. See him sit down with, yes, the man with the flat cap. Remove the cap. Let them crouch together. Let them speak to each other discreetly, one with a thin smile on his face, the other with his eyes glancing down. Have them say something you cannot understand. Put a cough in the room. Okay. Now take away the table. Remove the walls of the café. Have the two men gesture in the blankness that remains. Have their gestures make shadows on nothing at all. Tear through the shadow of one man and find the photograph of his father’s house. Open the door of the house and there find two other men, resembling each other, carrying on in the living room. Draw the two men into a conversation had between old cousins come together for a holiday. Turn the sound up so the rest of the family can be heard arguing and jesting and shouting from the kitchen, but keep these two men where they are; keep them sitting alone and discussing important matters, matters like wages, like disease, matters like helplessness and hindsight and other people’s futures. Have them digress. Be sure there is an old coffee table there, chipped at one corner and with faint stains here and there. Be sure there is a couch along the wall, a bunched up blanket on one end. Be sure that one man is sitting on the other end, and the other man beside him in a chair that would recline if he’d like it to. Now listen to the cousins talk of a loved one. Listen to their concerns. Follow the head of one man as it shakes and then, moments later, shakes again. Read all kinds of things in their eyes, in the way they hold their hands, in the rise and fall of their voices. Read worry and hold it. Hold the worry there for a moment, like a lampshade. Now go into the kitchen and put the rest of the family members all around you. Have the family talking all at once. Notice the window is cracked open. Feel the cold air coming in. Feel it coming in and feel also a hint of heat from the stove and the smells of the family and their half-eaten food. Have it mingle with their breath, with the spit of their words, and holiday drinks. Make sure a street can be seen clearly from the window. Bring together the noise of their talk and the noiselessness of the street. Find yourself being drawn to the quiet of the street. On that street place a runaway cat. Move the cat up the street toward the horizon. Don’t worry about the family in the kitchen. Don’t worry about the two cousins in the living room. Stay with the cat. Follow the cat into each circle of night, into an unlit alley near the city center. Lose the cat in this somewhere. Make the darkness unbearable. Make the darkness into an object in front of you. Hold a match up to the object. Have it look back at you.