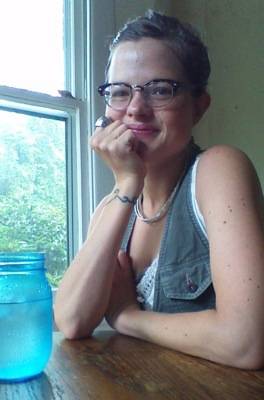 Born in Brown County, Texas, Landon Houle currently lives in South Carolina and works as an editor at In Fact Books. She is a winner of Permafrost’s Midnight Sun fiction contest and Crab Creek Review’s fiction contest, and her essay “The Plains We Cross” was listed as a notable in The Best American Essays. Her work has appeared or is forthcoming in Beloit Fiction Journal, Confrontation, The Long Story, Natural Bridge, Harpur Palate, River Styx, and elsewhere.

When Trapped in a Car under Water

These poems about mercy, these scenes of fathers and animals suffering on the road, remind me of my own dad and those nights he drove us grille-first down the boat ramp.

We couldn’t afford a boat. Once, though, at Sandy Creek Marina, we played make-believe. He ran his chapped hand down a Stingray with a ruby-slipper stripe and played the possibility. I played like I believed him. I believed it was the salesman we were tricking.

To launch a boat, you drive in reverse. You ease down the ramp until the water is just above the trailer hubs. But without a trailer and without a boat, only a family of three in a rusted Chevy edges closer and closer still until the dirty lake—black at night—laps against the tires, and I’d like to believe he was a few in. I’d like to explain by saying he was drunker than a skunk and stoned out of his mind. If this were true, I’d tell you something besides the way the headlights shone on the water and how, if you could trick yourself, you might think something beautiful glittered there just beneath the surface.

But if I’m honest, I’ll say he was never as sober as when the cab began taking in water, when the water came up to our ankles. He was never more clear-headed than those nights when my mother pressed my face to her chest, and when I remember, I remember her screams, but when I dream, I dream the truth. I was the one screaming. My mother was quiet. My mother never said a word, and through the pillow, through the soft flannel of her nightgown, I hear nothing but the beat and this as steady as ever.

In the poems about mercy, a father does what’s best. He drags the hazard of a doe, unborn fawn be damned, off the road and pushes her into the river, and I don’t know that the water is black any more than I know this man is a father, but there are truths you only imagine, realities you dream to understand.

The choice is never easy, and I wonder if it was more difficult for my father to drive into the water or out of it. I wonder which direction felt more like a kindness to a man whose face shone as dark as a night lake.

I’d like to read more poems about fathers who open their coats to bloody fawns. There, too, in the beat or—better yet—the caesura, should be a silent mother, a manual about what to do when trapped in a car under water. In my dreams, we bust glass with our fingertips. We reach out and touch something beautiful. All we have to do is wait. All we have to do is stay calm.

“ This piece began as a kind of response to William E. Stafford’s 'Traveling through the Dark.' The speaker in Stafford’s poem makes a merciful decision in that he saves other travelers from potentially being hurt by removing a dead doe from the roadway. Yet, in order to show compassion for others, he must also enact a cold and certain violence by damning that fawn whose heart still beats within the dead mother. 'I thought hard for us all,' says Stafford’s speaker, and it is in that moment of conflict, that instant of indecision in which the poem opens to the real complexity of human experience. Mercy and cruelty are sometimes more closely related than we’d like to think as my narrator discovers when she remembers a silent mother and a dark lake. ”