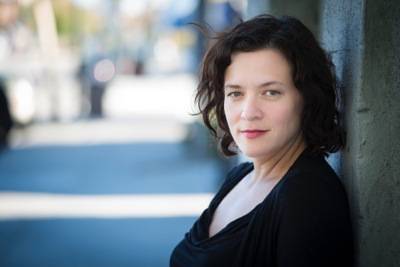 Erika Kleinman has work published or forthcoming in The Rumpus, The Apple Valley Review, and Salon. She is essays editor for The Nervous Breakdown. She lives in Austin, Texas with her husband and two young daughters.

Right after breakfast, we told Shea about the twins.

She was sitting on the couch, her arms folded under her shirt. Sesame Street was on the television. “Shea, take your arms out of your shirt. You’ll stretch it.” She took her arms out, keeping her eyes on the show.

“Daddy and I have something really important to tell you about your friend, Cash.” She looked dreamily away from the television.

I looked into her eyes. I wanted her to see me, to understand the gravity of the situation. “Cash’s twin sisters died.”

She tilted her head. Elmo’s voice rang out exuberantly in the background. She stared at us. “Why?”

I looked at Michael. He was sitting on the ottoman, his hands folded in his lap. I said, “Remember how Lydia was in the hospital to let the babies stay in her belly for a while? And remember how Lydia was sick?” She nodded. She had been very interested in the babies. She had learned a lot about pregnancy and birth when her little sister was born. She was excited when she found out the babies were the size of peas, raspberries, the palms of my hands. “The babies,” I said, “were accidentally making Lydia really sick and the doctors had to get the babies out right away.” I hesitated. “They were born, but the babies were too small to survive; they didn’t have enough time to grow.”

Michael and I glanced at each other. “If you have any questions,” I said, “you can ask me, okay? You can ask us.”

That night she couldn’t close her eyes. She said she kept seeing two skeletons, one with green eyes and one with red. The hair on my arms stood up. “Were you watching something on television with skeletons?”

“No,” she said, her eyes watery. “I don’t know these skeletons.” She pulled the blanket up to her chin. “They went away now,” she said, closing her eyes. I lay next to her for a while, listening to her breathe.

In the morning, she told me Cash was lucky the babies didn’t live because now he wouldn’t have to share any attention and listen to them cry. She said, “I wish we were a family of three again. I don’t like having a baby sister. Phoebe is boring.” Phoebe was moving a baby doll from the couch to the floor, putting a washcloth on the doll’s back and patting it. “Nigh-nigh time,” she said cheerfully. She had loose blonde curls at her neck and a tiny ponytail on top of her head, like a fountain. Shea looked at her and crossed her arms. “See, she’s stupid. She can’t even play right,” she said, scowling. “I just want to throw her in the garbage.”

I nodded. I felt a tightness in my chest, a surge of protection for my younger child. “Yeah,” I said. “I get that. I felt the same way about my brother sometimes.”

I put together a package for Lydia and her husband, John. Some books, some puzzles for Cash, and a bag of weed from the dealer of a local celebrity, so I was told. I didn’t know if she and John smoked but I had a hunch she might partake. I had bought a glass pipe at the gas station. My husband made pumpkin pancakes. He wrapped them carefully in a towel and put them in a Pyrex container with a lid. “You’d better get going so they stay warm,” he said. Shea had written a note to Cash for me to include. It said, “I’m sorry the babies died. Come to my house sometime.” Flowers. Happy face.

She asked me: “What are their names?”

The names were given to them after they died. At twenty-five weeks gestation, Lydia and John had not yet decided on names. Lydia told me their names when I crawled into bed with her, right after she came home. Her eyes were hugely swollen, her eyes fleshy slits. “I cried last night until I fell asleep,” she said. “There was salt on my face this morning.” Then she told me their names. After a poet and a Dylan song.

“Their names,” I said to Shea, “are Rumi and Isis.” A murmur and a whisper.

The next day we left for a planned trip to Costa Rica. We were scoping it out to see if we wanted to move there. At a beach restaurant, Phoebe fell off of her chair and smashed her lip on the table. I soaked the blood up with napkins, dropping them on the table one after another, as both children screamed. My husband took her as soon as the bleeding stopped, holding her against his chest, smoothing her hair. That was going to be a fat lip.

Shea continued to cry long after her sister had recovered. Phoebe toddled away, looking for hermit crabs with her dad. “Hey, Shea. Come here.” She sat on my lap, trembling. “Phoebe is fine. She just has a big owie on her lip. Your lip has a lot of blood vessels in it so it bleeds a lot. She’s okay.”

A look of recognition. “An owie?”

“Yeah,” I said, squeezing her. “Did you think Phoebe was hurt really bad? Is that why you were crying?”

“I was crying because I thought she wouldn’t be alive anymore.”

We played at the beach the next day until sunset. Shea and I walked back to the hotel. As we walked around the corner to our hotel room, we saw a dead squirrel. He was brown and red like a fox, with a furry black tail. He was on his back, bloated. His eyes were black and shiny. His teeth were yellow and sharp. Shea knelt down. She reached out to touch his head.

“No!” I said sharply. “Don’t touch it.” I didn’t want her touching something dead.

Shea covered her face in her hands, sobbing. “I hate it when people die. I don’t want Phoebe to die. I want her to stay alive and I wish a fairy could make everyone alive again, even Cash’s babies. Even this squirrel.”

She reached for me then. I lifted her into my arms, and felt the weight of her, the tears from her face on my shoulder, the salt-sun smell of her hair. I breathed her in. We were quiet the whole way to the hotel, then she let go of my neck and slid down my hip. She ran toward her cousins, away from me. I watched her until she reached the safety of their circle. They were exclaiming over some tiny shells they had found. They stood together for a long time, comparing their treasures and holding them up to the sun to see their bumps and spirals, their chalky pastel colors and iridescent shine. For days, the children carried the shells in pockets, in palms; as if they were not charms, but amulets offering protection, delivered from a deep and ancient realm.

“ I really connect with children who are grieving. I feel that they do a much better job of it than adults, who have been taught all of these dysfunctional ways to deal with loss. When the close friend of mine in this story lost her twin babies, I wasn't sure how to support her even though I also felt devastated by their deaths. I didn't feel I had the right to grieve what was ultimately her loss. My daughter taught me a very valuable lesson, without even meaning to—that when we love someone and something happens to them, it happens to us, too. ”