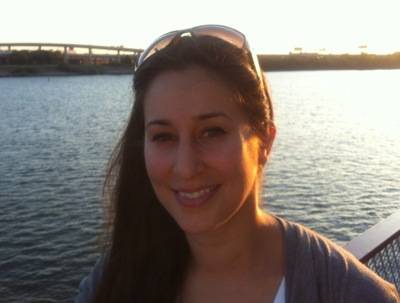 Brenda Peynado has work appearing or forthcoming in The Threepenny Review, Black Warrior Review, Pleiades, Cimarron Review, and others. She received her MFA from Florida State University where she was a Kingsbury Fellow. She is currently on a Fulbright Grant to the Dominican Republic.

Your parents believed in infant swimming lessons, in pool water that cushioned you like a womb, smooth with clarity. Once a week, they held you underwater to see bubbles released from your nose, then brought you up to air, your arms and feet kicking like again you were born. Months later, you can swim like a little frog. They graduate you from the class with fanfare and baby-safe balloons.

Two years later, you remember none of it. Your parents throw a party, everyone grilling or swimming or running in the backyard. It is easy to forget you. When you fall in the pool, no one notices. In dreams you still have now, you remember falling like this: You walk on the bottom of the pool, adults’ legs kicking in the blue in a slow ballet, mica ground into the walls glittering and pockmarked. It’s like walking on the skin of the moon. The world hovers in a deep silence. The steps, shining aquamarine with tile, waver in front of you. A net on a long pole plunges into the water, extends towards you, lifts you towards the surface. You are smiling.

Your father tells you a different version. When they realized you were gone, when they saw your dark head underneath the water, he dove in, thinking you were already dead, grabbed you up by your arms. Everyone was yelling. Were you already dead? you want to know. Did someone have to use CPR? you ask. But no one remembers.

It will take you seven years before you relearn how to swim. Until then, you scorn arm floaties and instead hug a beach ball as you go into the deep end, twelve feet, deeper than any of your friends’ pools. Once, you squeeze the ball too hard and it explodes from your grip. You flail harder than you’ll ever remember moving, and you scream. For a moment, you rise out of the water like you’re about to fly. Then you sink back down. That time, an uncle saves you. Once, you float on your ball around the deep end as the edge of the water by the tile begins to curl blackly. A water moccasin slides towards you. You kick to the steps just in time. Your father tells you to hold the screen door open while he brings the snake out on the grass, and then he lets you hold the pool net to shield him while he chops its head off with a rusty shovel, the gritty crunch of metal on the concrete walkway. The tail slithers wildly towards you without its head.

As a teenager, you run wild with a pack of other kids at a tennis camp. The green clay courts grind to dust under your pounding feet. Behind the courts and the clubhouse, a pool sparkles in the summer. In fall and spring, the pool grows brown-green, so milky with algae that anything could be living under its cover. Those school months, you pull up weeds with the other teens and tend the courts with wheels that uncover white lines of tape from under green dirt, blades that slice up chunks of mold, golf carts that run brushes in their wake. You remember a boy, skin the color of chocolate, eyes black and unfathomable. When summer comes, you all swim during breaks, letting the courts go wild. Once, the camp holds a swimming competition, categories in freestyle and treading water. You are not the fastest swimmer, but you and the boy—who you want to beat, who is also the boy you want to love—remain the last two treading water against each other. You both swim for hours. The other kids have long since grown bored and returned to the courts. One coach stays on as referee. Your arms stroking the water, their rippled reflection almost touching his underneath. Your secret is your breath, how you keep your lungs full of air. Finally, the boy pulls away to the ledge. You have won. The boy will turn out to be a sore loser and barely speak to you before he stops coming to the camp altogether. You want to keep treading for hours more, like you already know that water can be mirrors and you are the only thing standing in your way. The coach blows the whistle. Months later, the pool is murky again and impenetrable.

Your father signs you both up for scuba diving lessons as a peace offering, the summer after your first year of college. You resent him, for how safe he’s tried to keep you all these years, when all you want is to fly into danger head on. The hiss of your breath in the regulator. Your faces in masks. You still blame him for almost killing you in a practice exercise while thirty feet deep, proving you could take the regulators out of your mouths, let them float and fill with water, replace them into your mouths safely. Your father pulls the wrong regulator, yours, putting yours in his mouth, keeping your air. Five years after that, he signs you up for diving with the sharks at Sea World. In the time between, you have backpacked alone in Eastern Europe, in India, in Latin America. You have gotten the danger you have always reached for. The sharks circle you, trainers kneeling in front of you with large metal pipes like tridents. A hammerhead shark seems unusually interested in you every time it swims round. The trainers keep pushing it away with the metal tubing, placed just behind the eyes with a slow, firm shove. The shark is fooled; it thinks it has hit the clear aquarium glass again, somewhere beyond which it cannot go. Your mother, on the other side of the glass, becomes hysterical, waving her arms. You stay very still, watching the giant groupers, the flash of teeth, the flare of sharks’ gills. That moment is the quietest moment you remember.

In graduate school, you house-sit for a professor going up-mountain for the summer. You are charged with tending the pool, the yard, the dog and the cat. You feed the dog and the cat, forget about the pool. At that moment, you are struggling with your life, its deadening stability, how fast everything can change. Your mother is officially in remission from cancer, the occasion for going back to school. One rainy day, it is cool enough that you can walk out to the patio without worrying about sweltering heat. The precious blueness of the water has disappeared and gone to green. Algae forests cling to the walls. Snakes curl up against the ledges. Frogs and tadpoles lunge around the depths, mosquitoes and frog eggs frothing the water into a film. Two weeks later, you have killed everything, the eggs and the bugs, and beheaded the snakes. You can smell chlorine even in the house. Everything is still again, waiting.

When you dream of flying, the air is as thick as water. To rise, you suck in deep breaths. Hyperventilating, your lungs fill like balloons and buoy you up. You tread the air. Often, you dream you are living underwater in the mute of a pool, the churn of bubbles and the booms of cannonballs off the deep end. You have cut the heads off snakes, and their bodies, strung up on the walls, wave slowly. A shark lives in the deep end. Everyone is afraid and splashes out, but the water won’t release you. Will the shark eat you whole? Will it circle you forever?

“ I grew up in Florida, land of perpetual summer and man-made water-holes. Most of my childhood memories are centered around pools, if not in them, running around them, playing with them sparkling in the corners of our eyes. We all knew someone who knew someone who'd drowned, or had our own close calls, or had our scars from slipping and falling in the deep end. It's always captivated me, how dangerous they were, how animals were drawn to the water, and yet how calm they looked, all that blue veined with light. ”