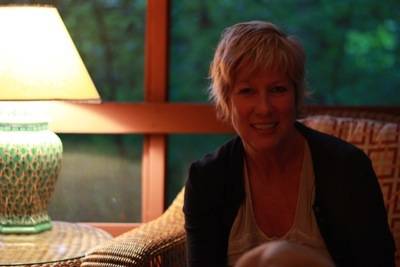 Marcia Aldrich is the author of the free memoir Girl Rearing, published by W.W. Norton and part of the Barnes and Noble Discover New Writers Series. She has been the editor of Fourth Genre: Explorations in Nonfiction. In 2010 she was the recipient of the Distinguished Professor of The Year Award for the State of Michigan. Companion to An Untold Story won the AWP Award in Creative Nonfiction. She is at work on Haze, a narrative of marriage and divorce during her college years.

He enters stage left from the parking lot in a slow and steady gait like someone walking out on a range. He moves as if he has nowhere special to go. You enter from stage right near the tennis courts with two white towels thrown over your shoulder like someone rushing to stop a bleeding wound. His flip-flops make a familiar plopping sound on the concrete. Barefoot, you are soundless. An observer would say your eyes do not meet. Is the observer right? Have you made eye contact or haven’t you? You like to think you do not need to look at each other.

Every day at 3 o’clock you go to an oblong pool under a hard sky in the middle of a corn field that a train passes through in the Midwest. You know this place well, this place where you have been stranded for twenty years. You do not like sharing a lane. You watch the other swimmers to see when a lane opens. Sometimes he stares at something far away, at a sight you do not as yet see. After ten minutes he walks over from his chaise to the pool willing the lane to be empty, to be his. He stands with his hands on his hips and looks at the water, considering it. You know this stance well, this willing things to be his.

Calm, glassy water, the color of blue slate. On the horizon white clouds of different shapes and sizes spread out. Five boys are hanging on the rope as if it was a long tree branch and they were at a lake. A couple is standing knee-high in the children’s pool embracing, tight clinging embraces. Maybe they fear they’ll be washed away. A middle-aged man swims vigorously but isn’t getting anywhere. Three girls in itsy-bitsy bikinis stand in water up to their tiny waists holding their arms up and out of the water stiffly.

When a lane opens up, you hurry over before someone else claims it. You do not linger. You’ve never been the lingering sort.

When he reaches a point of readiness, he removes his hands from his hips and dives into the pool. His dive curves like a cork-screw or a question mark. The shape of him hangs in the air. He resurfaces half-way down the lane in mid-stroke.

He is long limbed with a wide wing span. Swimming the crawl, he lifts his arms out of the water and brings them down heavily, with hurt in the motion. You are long limbed with what an observer would call swimmer’s shoulders. A yoke could be hung upon you and your shoulders would bear the weight. You have borne the weight. A keen observer would see the dent that weight has made in your shoulder blades.

He swims in the middle lane; you swim in the lane next to him as if you were in a floating bed with a rope running down the middle, as if you were betrothed but not yet married. You never brush against each other.

After a few lengths, he removes his red suit. Underneath he wears a dark blue nylon suit. It is skimpy. He throws the red shorts onto the edge of the pool in a wet heap. He’s practiced at this strip, has it down to three quick steps. Why does he wear a suit over his suit? Why not just wear the little blue suit from the start? Before getting out of the pool, at the end of his swim, he puts the red suit back over his blue suit. This operation is much more difficult than taking them off. They are wet and uncooperative. It requires many attempts underwater while holding his breath. An observer would find his behavior curious and wonder what motivates his underwater strip. You would say modesty, the modesty of the no longer young who no longer likes to be seen in a state of near undress.

An observer would say he is a more powerful swimmer than you are—that he has the upper hand. An observer assumes someone has the upper hand in any pairing, that there is no such thing as equals when it comes to men and women in the pool. He flips at either end and sprays water high in the air above him. But is he; is he the stronger one? What defines power—speed, velocity, parting the waters, or making the slightest disturbance? Maybe you are the more powerful—after all, sometimes when you come to the pool in the middle of the corn fields at 3 o’clock, everything you are is understood by the word swimmer. You are the incarnation of stealth and that has power, too. You prefer his back stroke—it’s quiet as if he’s swimming inside the water. Swimming next to him when he is on his back you do not feel lonely as you do at other times. But an observer would say his crawl is his most powerful stroke, the way he whacks the surface and makes a spray.

When he’s finished, he hangs on the wall sunning. Eventually he hoists himself out of the water and returns to his chaise. When you’re done, you haul yourself up the long ladder, rung by rung, your eyes open and unguarded now against the great bands of light.

“ I’m a sucker for writing prompts. My favorite activity as a teacher of creative writing is coming up with short impromptu writing prompts. So when I read the theme for The Baltimore Review’s summer contest—Threes—I immediately felt the excitement of a challenge. I wrote 'Swimmers' in response to the contest prompt and as is often the case including a third element complicated and enriched the material. ”