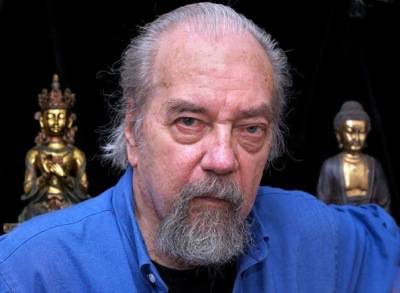 Dick Allen’s forthcoming eighth poetry collection, to be published by St. Augustine Press in Fall, 2013, is This Shadowy Place—winner of the 2013 New Criterion Poetry Prize. It’s his first collection of all rhymed and metered poems. Allen has received NEA and Ingram Merrill Poetry Writing Fellowships, six inclusions in The Best American Poetry volumes, and a Pushcart Prize, among other national poetry awards. He has recent other new poems in Able Muse, Measure, Image, The Raintown Review, Drunken Boat, and Tricycle. Allen succeeded John Hollander to become Connecticut’s fifth State Poet Laureate, a position he will hold until Spring, 2015.

The House With Only The Sound
of A Dog Barking Inside

after a line from Haruki Murakami

On my morning paper route, I passed it every day,
the house with only the sound of a dog barking inside
out on the edge of our village—its curtains never parted,
its small porch always empty, nothing in the front yard
but yellow grass.  From the tenor of its barking, the dog
was medium-sized, probably a mongrel, not really in distress,
but lonely, mildly afraid, needful of someone to hear him
and to somehow respond. . . . One summer, more or less
feeling sorry for the dog, I mock-barked back while I pedaled
my bicycle into, then out of its earshot.  Yet since the house
wasn’t a customer on my route, I never gave any more
than that minute or two of attention as I tossed
my papers onto adjacent porches and I never once
saw whoever fed and kept the dog inside that house.

“ A number of things came together for the writing of this poem. Primarily, it was inspired by a line I’d copied down when reading Murakami’s 1Q84, a line which evokes the ordinary quiet mysteries Murakami continually presents to us. The line becomes the title of the poem and is repeated in the poem itself. Secondarily, I wanted to write about responsibility—not the responsibilities we take on, but those we can’t help but reject day after day. Who do you think you are, trying to save the world? But so much calls to us for help. And I’ve long been fascinated with sonnets combining natural speech patterns and slant and exact rhyme.

I was a paperboy in the 1950s, delivering the morning Schenectady Gazette throughout the village of Round Lake, New York. Riding first my Shelby bicycle and then the purple Schwinn I bought with paperboy earnings, I sailed papers onto old porches.

No other humans were about that early. Hidden things. Dogs often barked as I pedaled by. ”