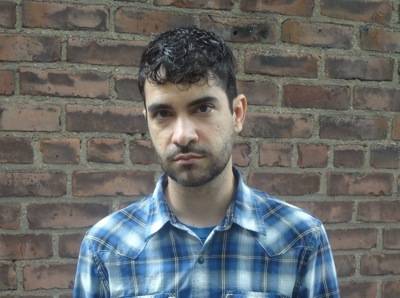 Dariel Suarez is a Cuban-born writer who came to the United States in 1997. He earned his M.F.A. in fiction at Boston University, where he was a Global Fellow. Dariel is a fiction co-editor at Blood Lotus Journal and a founding editor of Middle Gray magazine. He has taught creative writing at Boston University and the Boston Arts Academy, and his work has been nominated for a Pushcart Prize. Dariel’s writing has appeared or is forthcoming in numerous journals and magazines, including Gargoyle, Baltimore Review, Collier’s Magazine, Versal, SmokeLong Quarterly, and the Florida Book Review, among others. His work has been reprinted in Tigertail, A Florida Annual: Florida Flash and other anthologies. He’s currently finishing a story collection set in Cuba, titled A Kind of Solitude, and he’s at work on a novel about a Cuban political prisoner, titled The Playwright’s House. Dariel can be found at www.darielsuarez.com.

Yeyo torques his clutched hand at the base of the greens, where the beet root peeks out of the ground almost tauntingly, but he can't grab hold. His small fingers keep slipping. After a few tries he switches from a twist to more of a pull, then a rattle. The bulbous root shakes, the soil around it trembles, but just barely. Eventually the greens snap off. Yeyo has to dig once again, jam muck into his already grubby fingernails. The dirt in them has solidified. Scraping the grime with the sharp end of branch or a fork no longer works. The tips of his fingers are permanently brown.

During his three-week stay at the youth labor camp in Güira de Melena, Yeyo has picked tomatoes, gathered cucumbers, and planted garlic. Nothing has been as exasperating as the beets. They're obstinate and cling to him. The arch between his thumbs and index fingers has turned purple from the constant friction. Mutant claws, he calls them. He's scrubbed his hands tirelessly, but the stains won't come off. They're like dried ink on paper.

Yeyo finally yanks the stubborn root, plunks it into a burlap sack, and takes a glimpse at the next beet. It's protruding half-way out of the ground. He sees this as a momentary relief, especially since the sun feels like an immense hot iron on his back and his knees hurt from all the scuffing. There isn't much space between beets, so he crawls along, towing the sack like his older brother did with him years ago on the way to school—short, angry tugs—as if Yeyo, like the sack, were a burden that couldn't be left behind.

Right before lunchtime, after four hours of work, Yeyo's stomach begins to churn. His body stops sweating, and he feels as if he were burning. A fog overtakes his vision. He blinks, and sees everything in blurry flashes. His burlap sack is bulky, requiring a strenuous two-handed pull. Yeyo has no idea whether he's met his morning quota. By now he doesn't care. He wants shade, some food, even if it's the soggy rice and overly salted plantain puree they've fed him the last two days. It'd be nice if they added a tomato, he thinks, or half a corncob and some canned fish, like on the first day.

Yeyo looks up and notices his teachers, Mr. Amador and Mr. Bouza, at the far end of the furrows. Both men are wearing black boots, loose-fitting shirts, and straw hats. They look nothing like the teachers he knows—pointed shoes, tucked-in shirts, neatly gelled and combed hair. Mr. Bouza has a clipboard resting on his knees. He keeps jotting something down. Checkmarks or numbers, Yeyo surmises. Mr. Amador raises his head in Yeyo's direction. Yeyo pretends to tussle with the beet in front of him. He snaps off the greens again. "De madre," he mouths, and forgets about his teachers.

Time passes and there's no word on lunch. Yeyo's classmates start to murmur, complaining that it’s been too long. Yeyo shuts his eyes for a moment. His hands are numb, his lower back stiff. There's a knot atop his stomach. His throat feels stuck, as if glue had been poured into it. He begins to wonder where all these sacks go, how they are loaded onto trucks, dropped off at the bodegas in the city. He wonders whether they even get that far. Maybe they're distributed among the peasants. Then he decides that none of it matters. He's just rambling, looking to distract himself. The word unfair lingers in his mind. He wants to feel angry. He shouldn’t be here. He's a model student, excelling in physics and math. He shouldn't be clumped with the others, forced to attend a labor camp. But he's too weak to conjure up anger. At this point he'd just cry, and he won’t allow himself to break down, not in front of everyone. They'd call him un rajao. A coward.

Mr. Amador blows a whistle and the students rise. They begin walking down the furrows. The ones with cumbersome sacks lag behind, heaving and grunting. The rest clamor and cheer. Yeyo finds himself close to the front. Surprisingly, his beets aren't that heavy. His vision is back. So is his strength. He's hungry again, his throat primed for some cooling water. He chucks his sack next to the others, gets a nod from his teachers, and keeps on toward the camp.

As he walks, Yeyo doesn't think of the two weeks he has left in this place, or the arduous tasks that await him, or the afternoon quota. He doesn't think about his gaunt, city-boy frame not being a match for these massive fields, how his self-doubt and introversion, if he let them, could make every second here unbearable. He doesn't think of his parents, whom he misses more than he's ever missed anything and who will surely bring him comfort food on Sunday. Yeyo plods ahead, his oversized boots light as slippers, though his legs can barely lift them. His neck droops forward, and he stares at his stained hands—these claws that suddenly feel familiar, as if they are really a part of him—now a darker shade of purple, almost a red.

“ When I was eleven years old, I attended a youth labor camp in Cuba for the first time. The experience was initially really rough on me: being far away from my parents; having to work eight-hour days, six days a week; trying to keep older and bigger kids from stealing my things. I remember that one of our assignments was to pull beets out of the ground. I’d never struggled so much in my life, and I began to question why I had to be there. After a couple of weeks, however, I’d become accustomed to the circumstances and the work. I’d made some new friends and realized I could cheat on my quotas so I wouldn’t be absolutely exhausted at the end of the day. By the time I got to return home, although I didn’t necessarily love the camp, I’d grown to like my independence and was proud for having learned to stick up for myself. My hands remained stained from the beets for a while, so much so that I briefly wondered if they would remain like that forever. Reflecting back on all this, I wanted to explore what it’s like for a kid to be in that position, the things that might go through his head, and the transformation that begins to take place, all because he lives in a system that forces him to do that kind of manual labor. ”