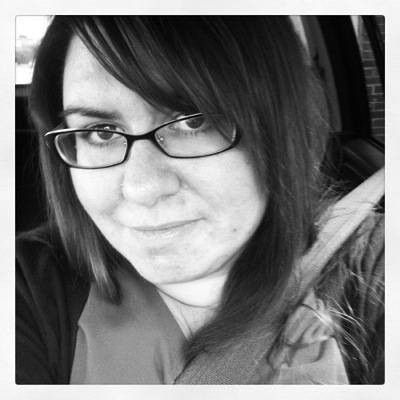 Alisha Karabinus is co-founder and Executive Editor of Revolution House magazine and an MFA candidate in Fiction at Purdue University, where she is also the Managing Editor of Sycamore Review. Her work has appeared or is forthcoming in such publications as the Southeast Review, Passages North, PANK, and Per Contra. She lives in Lafayette, Indiana, with her husband and two young children.

Martina woke with a hollow feeling in her crotch and the phone alarm screeching in her ear, and only when it quieted did she realize she was naked except for a T-shirt crooked across her chest, one arm pulled out of the sleeve. Only then did she remember the woman from the bar, and thinking ohmygod ohmygod, she jerked her head toward the brownstone’s tiny bathroom, half-rising under the crumpled tangerine sheet, but the door was open, the room dark, and she sighed relief that the mystery woman hadn’t slept over—and what was her name? did she know? did it matter?—because all she could remember was swigging from a heart-shaped flask in the cab and talking to her phone, asking, “Siri, do you like girls?” and the woman, dark blond hair like corn silks, she remembered that, she had laughed too when the phone replied, “I’d rather not say”—pause—”Martina.” Martin-uhhh, in that robot voice, and they’d shrieked like teenagers. “Me either”—pause—”Martin-uhhh,” the woman repeated, then kissed her hard, Martina’s head banging against the window, but she hadn’t cared; she was drunk and the woman was scratching stubby turquoise nails down Martina’s thighs while, in the mirror, the cabbie’s eyes gleamed like insects.

Together they’d tumbled from the cab, Martina’s bra unclipped and loose under her T-shirt, Martina with no idea what she was doing until whiskey showed her how, and it was all so simple: kissing, touching, squeezing, all flesh is flesh, no matter the color and shape, and she’d always loved lesbian porn, so she’d fallen into bed with the woman, why not, only to discover that lesbian sex with random strangers from bars wasn’t much like lesbian porn at all, and she wasn’t even sure if it had been safe, because she didn’t really understand how lesbians used protection, and what exactly they were protecting from. Of course, she’d heard of dental dams, but what the fuck was a dental dam anyway and where did you even buy one? She imagined layers and layers of rubber in the mouth, like a stretchy sci-fi sports guard or something harder, like a fresh retainer, all tight, drool-inducing wires, and that sounded horrible, but sex was risky, you could catch the crud, the crust, and she remembered singing stranger danger, stranger sex danger to the woman; she remembered the woman laughing, even though it was stupid, really, and hadn’t meant anything at all since they hadn’t done a goddamned thing in the name of safety past taking their shoes off before flomping onto her bed.

But the worst thing was the discovery that sixty-nining wasn’t as much fun as it looked when the girls were airbrushed and clean, because sixty-nining, turns out, was really just putting your face in someone else’s ass, and worse, having your ass in someone else’s face, and you never really know what your ass looks like because you can’t see it without pretzeling up in front of the mirror, and who’s going to take the time with the last drops of whiskey rolling on your tongue? And even if you did twist and strain and use an alcohol wipe just in case, you still couldn’t smell your own ass. What if, in the shower, she’d skipped a step, not realizing that hours later there would be a face buried in her ass? So all she could say of lesbian sex was this: the morning after was a chain of questions she couldn’t ask the nameless blond. Martina clutched her phone, but had no number to call, only a disembodied voice with no answers. Siri, she wanted to ask, hand hovering over the button, Siri, tell me: how do you know when you’ve made a mistake?

“ The idea for this first came to me while I was driving to Chicago with my husband. Conversations with my husband are always a delightful roadmap of non sequiturs, especially when we're on the road for hours, and that day we were asking my new phone various questions in pursuit of the most ridiculous answers we could get. Turns out Siri isn't much for discussing sexuality, hers or anyone else's. This story was born of those weird digital conversations and an offhand remark from my husband, though I didn't write the first draft until months later, when I discovered an audio memo I'd recorded that day, while we drove past the eerily quiet windfarms north of West Lafayette. The notes I dictated weren't funny after all; they gave me an immediate image of this woman, lonely and confused in the morning after a casual encounter, with no one to turn to but an electronic voice. ”