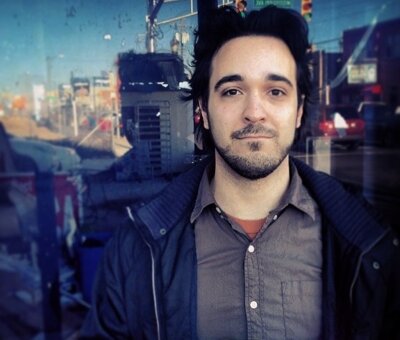 Mike Nees lives and works in Atlantic City. He’s a case manager for people living with HIV. His fiction has appeared or is forthcoming in Driftwood, Typehouse Literary Magazine, Cleaver Magazine, matchbook, Heavy Feather Review, and elsewhere. He’s the proud host of Atlantic City’s Story Slam series, more on which can be found at https://www.storyslamac.com/

Among the mouse’s many enemies, winter itself
ranks high. Too anxious to hibernate, he climbs a
black locust tree to the big knothole where the
honeybees nest—they vibrate in such numbers that
he can warm himself here, at their doorstep.

In the hive, winter is defied by sacred bee rituals. A
single bee is a cold-blooded insect, doomed to
freeze like any other—but when the colony rotates
itself, swapping cold outer-bees for warm
inner-bees, it becomes a warm-blooded creature.

In his blind first weeks of life, the mouse suckled
from his mother, enjoyed the warmth of siblings
piled upon him. Thinking back on that now only
pushes it further out of reach. Like all of his
brothers, he was cast off with age. Now he is both
warm-blooded and alone—both drawn to those
rodent cliques he stumbles on, and pushed away by
their bared teeth and angry squeals. Males
determined to guard their females and crumbs. He
feels none of that bone-deep longing for the hive,
no—but he can still feel its warmth, can taste the
scent of honey carried on the cold night air.

Thousands of wax cells brimming with honey.
Thousands of sisters worked to death in its
cultivation. The survivors take modest sips
now—just enough to continue serving their role as
living insulation.

It’s degrading, stealing warmth from the hive. The
mouse is no worker bee, no sterilized clone. He has
dreams they couldn’t fathom. If he can just survive
this winter, and beat his competition in the spring,
he could still create a society of his own. Rubbing
his nervous paws together, the thought sustains him.
A pawn to no one’s queen: he may yet starve to
death, or freeze, but his mind remains his own.
Deep down he’s an innovator—destined to find the
weak spot in some human insulation. A rusty mesh
he’ll chew through, unlocking a new kingdom. How
he’ll splash his scent at its gates, claim its female
pilgrims, guard his creation until his death.

Each worker hatched with a queen’s potential,
yes—prepared to take on that burden, if fed the
right jelly. A life spent wringing out egg after egg,
hour after hour, trapped by her own significance.
But the queen ate that loaded gruel for them all.
Spared her daughters the curse of fertility.

A freezing wind pierces the mouse’s coat. He feels
his paws locking up. The pride that holds him
together wanes.

As the temperature drops, the bees huddle even
closer together. They shuffle to the same beat that
fueled their spring and summer, that same pulsing
bass that shook the walls of their cells as larvae.
How quickly each chewed her way out, once she
had the mandibles. Ecstatic to join the rave, dance
along the comb, taste the sticky snap of nectar
passed from mouth to mouth, stab anyone who
smelled unwelcome. Ovipositor repurposed as a
blade.

It’s so cold that the mouse stops shivering. He’s
confused. Some still-functioning instinct tells him
the hive is bad, he hates the hive, but his nose takes
new interest in it. Could it be—is that a whiff of his
own in there? He sniffs again. Fresh urine, to be
sure. In fact—no, it can’t be. But yes, his nose is
certain: it’s sweet, estrous urine. There’s some
unclaimed harem within the knothole, flush with
warm mammal limbs. Just imagining how scared
and desperate they must be—the dead of winter, no
male scent to shield them—his penis swells to the
size of a rat’s. The wait is over! he wails. Your man
has arrived! He pours so much into his love cry, he
almost forgets to stop and listen for their response.
It comes as he catches his breath. How his ears
twitch at it: angel-song. A dizzying choir. Every
voice aches for him.

In the hive, there’s nothing but the rhythm—all are
so consumed, they hardly register the stench of the
creature who breaks into the lower comb. That
greasy musk of a minor beast, petty thief—it can
lick what it likes off the floor. The focus remains
each other, the dance. Winter is always the bigger
threat. But why then do they hear the beast
clambering towards them, chipping hexagons as it
climbs? After months of the same winter shuffle—a
lifetime, for some—the bees struggle to break out of
their trance. A mere handful are clearheaded as their
outer flank is breached. They rally everyone they
can with headbutts and war calls, until the excited
are enough to encase the enemy. To be its iron
maiden, riddle it with venom. All share a moment
of uncertainty before it bursts into convulsions,
loses its grip on the comb, and plummets to the
floor with assassins attached. There, in their foyer,
the bees rip themselves free of the kill to stagger
about in one last, delirious dance, entrails in tow,
before collapsing beside it. End of the line. But the
excitement they roused outlives them—it drives the
sisters who flay and chuck the beast’s remains, lest
it attract further pests. Even when they reach its
skeleton and more stubborn guts, it’s hard not to
keep ripping at the corpse, to work themselves
ragged—its presence a stain on their home—but
winters are long, energy precious. They settle on
coating what remains in bee glue, layer upon layer,
until it smells like any other passage of the hive,
that fable they write together. In the spring, sisters
yet to be born will beat their wings under its ribs.
Every safe return from that mad swirl of light and
smell beyond the hive will be greeted by its skull, a
steady fixture.

“ How is it that all the movies we show our children about ants and bees, marvels of collectivism, center around the grievances of a male who finds his work beneath him? Why is he always voiced by a comedian past his prime?

Females do all of the work in these societies—all the building, hunting, fighting—and they are anything but ambivalent about it.

Males, on the other hand, are raised as sperm donors for future generations, useless to their own colony’s survival. As Plath notes in her poem, “Wintering” (from which this story takes its title), a hive discards its males every fall, no longer willing to carry their weight: They have got rid of the men/The blunt, clumsy stumblers, the boors/Winter is for women. ”