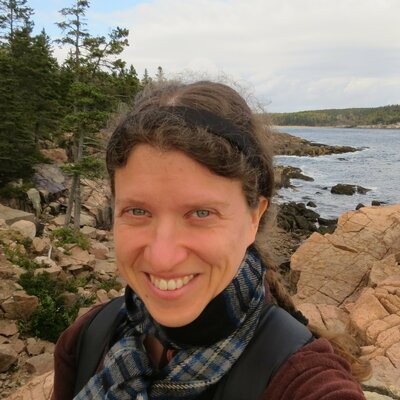 Melinda Brasher spends her time writing, traveling, and hiking. She loves the smell of autumn leaves crunching and the smell of orange blossoms in spring. You can find her work in Short Circuit, Hippocampus, Deep Magic, and others. Visit her online at www.melindabrasher.com.

I feel like going into the wild is a calling all feel, some answer, and some die for.

— hiker Bryce Gillies, written as he lay dying in the Grand Canyon

I learned the word for avalanche in Slovak on a gray-sky summer day in the High Tatra mountains. Among stones carved with memorials of the dead, among plaques and climbing ropes hung like wreaths in trees, I saw the word, again and again. Lavína, lavína, lavína. Then I started to notice it paired with words I knew: rocky lavína, icy lavína, snowy lavína. Finally I put it together.

Avalanche. The very word inspires respect when you're somewhere like the High Tatras, surrounded by the grandeur of winter’s playground, where peaks soar nearly vertical above you and you walk on icy snow along the contour of a mountain that would dump you into a long, steep tumble if you lost control. It's a word never far from your mind when some trails close in winter, big signs warn “avalanche danger,” and you know it might be your own weight that sets off the inexorable slide of snow. It’s a powerful word when, in summer, you scramble over tumbles of rock, evidence of long-past avalanches, when you reach the moonscape heights and find snow still nestled in the shadows and try to imagine what it must be like up here in winter.

My friend Honza saw his friend carried away by an avalanche in these very mountains. Luckily, it was powder snow, Honza says, as if it's no big deal. After further questioning, he admits that it was a big deal. The friend miraculously survived with only a broken leg, but getting him down the mountain was a feat. The accident happened near the summit of Kôprovský štít, one of the peaks that rises above the tree line, towering over mountain lakes and guarding the rugged border to Poland. I hiked Kôprovský štít once on a glorious summer day, and though it isn't a particularly long trail, I would never call it easy. Honza and his hiking companions had to descend about 2,700 snowy and obviously avalanche-prone feet, through rocky and sometimes-treacherous terrain, carrying their injured partner to a mountain chalet where some of their party could rest while the others hiked another few miles to get the car. Now that it's over and all's well, Honza can act nonchalant about it. Just another day in the mountains. But he does realize how lucky they were.

On January 20, 1974, an avalanche here killed a dozen people. I read it on one stone, then read it again to make sure I understood. Later I looked it up on the Mountain Rescue site, and most of the victims were eighteen to twenty years old. Another source said they were on a school ski trip. I can hardly imagine the tragedy of such a thing.

Most years, at least half a dozen people die in the Tatras, sometimes significantly more, and though avalanches account for only a few of the deaths, history is still full of the spectacular accidents. I recently watched the 1998 documentary, Everest, which claimed that around one third of the deaths on that fabled mountain result from avalanches. The documentary was filmed before the 2014 avalanche that killed sixteen Sherpas and the 2015 earthquake that sent an avalanche sweeping through base camp, killing nineteen. In January 2019, a group of experienced backcountry skiers on an avalanche safety class in Colorado set off an avalanche that killed one of them. The same week, an avalanche in nearby New Mexico cost the lives of two skiers.

The biggest cause of death in the Tatras seems to be falls, though it's certainly not the only danger. I’ve been to the Tatras several times, but I spent the most time here in 2015, both in March and August. That September, late in the month, two older Latvian hikers got separated from their group and ended up spending the night on the mountain near one of the trails I’d hiked a few weeks earlier. They were found the next day dead of hypothermia. In November, a hiker fell to his death. In early December, a man died in an avalanche. Then, on December 30, four people fell to their deaths in three separate incidents. The next day, another death. Two days later, another. The next day, yet another.

Nowhere else drove home that point quite as powerfully for me as the Symbolic Cemetery where I learned the word avalanche. The Symbolický cintorín began as the idea of Otakar Štafl, a Slovak artist who loved climbing and skiing and spent years here in the Tatras. In 1936, on the first of November—All Souls’ Day—a group of mountaineers performed the first ceremony to honor fallen comrades, near the banks of serene Popradské pleso, a mountain lake surrounded by steep slopes. The cemetery itself opened a few years later with tall crosses painted colorfully in traditional local style and various memorial plaques, many of which were gathered from other sites around the Tatras, generally where the accidents happened. Now it holds more than two hundred memorials, and space is said to be reserved only for exceptional cases. There’s also a little wooden shrine, but instead of religious art, the altarpiece is Štafl’s oil painting, "Carrying Down an Injured Mountaineer."

The entire time I wandered around the Symbolic Cemetery, rock climbers on the sheer face high above us called to each other. The night before, I'd seen lights in the dark there, floating well above where I knew there to be trails. Night rock climbing?

I ask Honza sometimes if mountain climbing is the most dangerous thing he does. "It's not dangerous if you're careful," he answers.

The plaques here tell a different story, mounted on hundreds of stones in the forest below the peaks. For those who died on the north face of one mountain, on the east side of another. Climbing rock towers and descending peaks. Trudging through snow between mountain huts. Downhill skiing and ski touring and hiking. In winter. In summer. Alone and in groups. Doctors and students, archeologists and mountain rescue workers. At peaks and valleys and waterfalls. Rysy. Obrovský vodopád. Lomnický štít. So many at Lomnický štít, one of the highest and most famous peaks in the High Tatras. These are places I've been, or seen, or just daydreamed about as I looked at my map.

I’ve hiked trails here in late winter when the temperatures flirt with zero Celsius and the snow melts just enough to refreeze smoother, melts and refreezes, where regular hiking trails turn to ice and I’d have felt much safer on the steep bits if I’d had microspikes chained onto my boots. One day I heard there’d been good snow overnight on the east end of the Tatras and I followed it, taking a hike through the low gentle edge of the mountains in snow sometimes up to my thighs. Here and there I’d break through an unseen shelf and sink almost to my waist, and I wondered how people feel on glaciers, knowing that breaking through might easily mean a fall of a hundred feet, not a jolt of six inches that merely pushes snow up between your coat and your body.

Once, here in summer, I took a hike I wasn’t really prepared for. It involved one long, steep rock face where chains had been bolted into place to help hiker-climbers, where if you were cautious you weren't terribly likely to fall, but where if you fell you could easily die. This stretch is called Priečne sedlo, and it's nothing to real mountain climbers. Nothing at all. They hop right up it without using the chains, with no shaking in their limbs, no elevated heart rate. But their nothing was pretty scary for inexperienced, height-fearing me. I tremble to think about the things that scare them.

I’ve loved it all, every hike I’ve been on here. I love it despite the fear, not because of it, and that’s what makes me very clearly not a true mountaineer. But a mountain hiker—that I am. And this place is a hiker's paradise. Until it isn't.

I walked around the Symbolic Cemetery in tears, achingly sad. I don't know why it affected me so much. I'm not even sure it was all exactly sadness, but pure emotion—maybe even a touch of envy—at the passion it takes to live your life in a way that means you die in an avalanche.

I wrote down a lot of quotes from the memorial stones that day, things I wasn't sure I was translating exactly right, but whose spirits I understood. "Mountains were your love. Mountains became your fate." "Mountains, my mountains, I love you so deeply I gave you my soul." "After life, you will live in our hearts and in the mountains."

"They died in nature, which they loved." "The sunny peaks of the Tatras will be your honor guard."

Were these beautiful sentiments really the feelings of those who had died? Part of me thinks the dead might have written different epitaphs for themselves. Some of them, surely, would have cursed the mountains or tried to warn others that a risky push to the summit wasn't worth their lives, no matter how much they loved the mountains. "Beloved mountains, my fate." Whether or not the dead agreed with the noble sayings on those memorial stones, perhaps the people left behind—the widows and orphans and friends and parents—had to write the words, had to believe the words, or else the tragedy would feel too pointless.

I love my Arizona desert mountains where there's nothing to obstruct my view of cactus and creosote. I love the mountains in red rock country with their dusty greens and vibrant time-sculpted reds against the perfect blue sky. I love the Colorado Rockies where elk and bighorn sheep wander and the North Cascades, dripping with green. I love Alaska's coastal mountains with their toes in the water and their heads veiled by glaciers. I love the volcanoes of Guatemala and the German Alps and the High Tatras and the modest little mountains I could walk to from my apartment in the Czech Republic, where I named and adored each section of the trails I'd frequent. I love casual strolls and pine-scented picnics and long treks over mountain passes, ridge trails and narrow gorges and summit views, breaking fresh snow and ambling through summer meadows and exploring misty forests carpeted in gold. I love trail-finding and bushwhacking and scrambling over rocks on routes with chains and ladders. I love wildflowers and wildlife and snow and fog and sun.

But I wonder. Would I still love the mountains as they were killing me?

“ I watch, read, and listen to far too many books and documentaries about mountain climbing. It holds such a strange fascination for me. When I tell friends or family yet another new story about K2 or the Eiger or Siula Grande, they joke worriedly about me going off to climb Everest. Absolutely not. Never. No way. I'm not a mountain climber. But every time I finish one of those books, I find myself hiking to the top of some small local mountain, pushing myself just a little harder, climbing bits that scare me just a little more. I don't understand what drives some people to submit themselves to the misery and danger necessary to climb to the top of the world. But as I sit on one mountain peak and scan the horizon for more peaks to climb, maybe some part of me does understand. ”