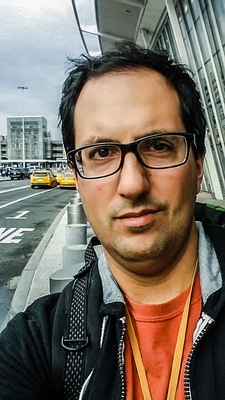 Marc Alan Di Martino grew up in the suburbs of Baltimore, Maryland. His work has appeared, or is forthcoming, in Rattle, The New Yorker, Valparaiso Poetry Review, Verse-Virtual, Palette Poetry, and many other publications. His first collection, unburial, will be released in 2020 by Kelsay Books. He currently lives in Perugia, Italy.

My mother is sitting alone on a park bench in Villa Borghese, eating a sandwich. It isn’t an easy thing to find a sandwich in Rome in 1966. She's had to root out the Bar degli Americani on Via Veneto, near the Embassy, in order to find ham on white bread. No mayonnaise. Imagine that: a Jewish girl eating a ham sandwich on a park bench in Rome with no mayo. What is she doing there, so far from home? And where is home, anyway? Her parents’ home in Brookline, Massachusetts? That isn’t home. Not anymore. She ran away from that home, came to Rome via Paris via San Francisco. Anywhere but at the shabbos table with that tyrant her mother and her ineffectual father. A ham sandwich on a park bench is better than that, she says to herself as a dapper man appears, dressed in a smart black suit. She notices...his teeth. Naively, she thinks he might be Marcello Mastroianni, her singular destiny to meet a movie star, fall in love, and become his wife. Live happily ever after. The fantasies that run through a young woman’s head. This man is not Eddie Fisher. Nice Jewish boy. Dungaree Doll. This man is a smooth-talker. He wants to sell her something. Realizing she is American, he begins speaking in broken schoolboy English. He turns on the charm, and she is charmed. What is he selling? Wine – what else? You are in Italy, poor girl, eating a sandwich, all alone. He overwhelms her, makes her feel like Audrey Hepburn. She, in turn, is an easy target. Not like Italian women. To get into their pants you have to go through their families. He knows. He has two sisters. He’s always beating up guys in his neighborhood for putting their hands on them. He’s got a reputation. But everyone knows American women are unmoored. Why else do they come here? To get into trouble. To meet a Casanova. To have what they call a ‘fling’. (He learned that word in a movie.) Then they go back home and get married to a Rock Hudson or a John Wayne, have two kids and two cars and pursue their dreams of happiness. Europeans have history, Americans have dreams. That seems to him a profound insight. My mother crinkles the cellophane into a ball, rolls it in her palm, brushes the crumbs from her skirt. He looks at her knees, the skin boldly exposed, wonders what’s beyond them. She isn’t thin, he thinks, as he absorbs her body with his eyes. He isn’t subtle. You don’t need to be in 1966. All you need to have is charm, and he has excellent charm. She decides in that moment she will go anywhere with this man. She will do anything he asks. She has nothing to lose, no one waiting for her on the other side of the ocean, no Eddie Fisher. Her brother is married to a German. Her brother the magician, who disappeared into a German woman and never came out. How she would like to disappear into this man, fall into the black hole of him, learn to curse her own parents in his tongue, allow the sensual inflections of Italian to evict the Yiddish gutturals lodged in her throat like fish bones. How she would like to learn to trill her r’s, double her consonants, put a crucifix around her neck for the sheer pleasure of seeing her mother’s dumbstruck punim, bury her alive with Roman invective li mortacci tua – fuck your dead ancestors – tear the crucifix off and flush it down the toilet, having exhausted its usefulness. She smooths her skirt, a little flushed.

“ This poem imagines my parents’ first meeting. Each brought to their marriage a very different set of cultural baggage, and each was (I presume) looking for an escape hatch from whatever life they had been living up to that moment. This is probably true of many marriages. Sometimes it works out, sometimes it doesn’t. In their case it didn't, but it was interesting to get into their heads for a while. ”