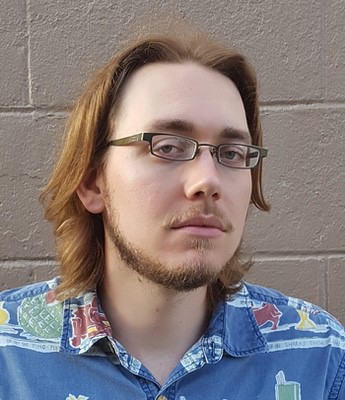 Maybe you’re not dead, just dead-tired.
I understand you, heavenly father,
with your feet up on the universe
and a bottle of entropy
or unfiltered time leaving a ring
on the cover of some book you bought
thinking surely you will read this
on your days off, but now
you’re too exhausted to do anything
except text your old friends
who live now in different cities,
or is it galaxies?
It feels like it’s been years because it has.
And you say to yourself
at least this job, being everything,
is better than the last one,
which was being nothing.
I want to ask if it was anything
like my last job,
bolting calipers onto axles
in a factory that felt like it went on forever,
all piercing lights and safety glasses
and cement floors
gravity crushed us against like chalk.
Maybe you don’t text at all
because it feels too much
like waiting for prayers to arrive,
which is work.
In any case, I admit I miss the feeling
of being in church,
which means you at least existed
as architecture, music,
and the comfort of the herd,
which is also the wave
in the crowd at a hockey game.
It’s thin ice the players skate on
but they seem to do alright. On the way
back from the stadium one night
I turned down the wrong street
and found myself driving around
in the neighborhood directly next to mine,
whose layout I had no knowledge of,
and on the radio the part-time DJ played
deeper and deeper cuts
from some 80s thrash metal band’s discography
and I thought this is really it, my life,
lost in all this noise so close to home.
It’s a little like what we’ve come to,
finally, your left hand
holding the remote, your right hand resting
absentminded on your leg
with the whole world burning in it.
Listen:
« Previous