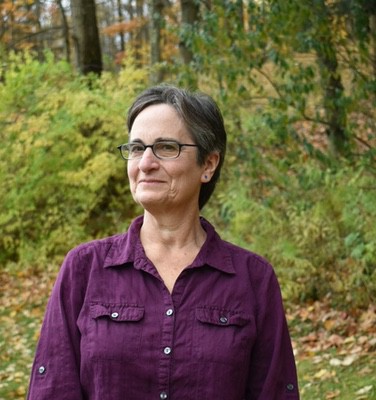 Merrill Oliver Douglas lives in Vestal, NY, where she does freelance writing for trade magazines, university publications, businesses and nonprofits. She holds a BA from Sarah Lawrence College and an MA in English from Binghamton University. Her poems have appeared most recently in A Narrow Fellow, Connotation Press: An Online Artifact, Barrow Street, San Pedro River Review, and Eunoia Review.

Summer, in My Early Twenties

Those weeks when the fan on the windowsill
mumbled apologies hour after hour,
I would wake up three or four times a night

and stand at the refrigerator
gulping cold water. Nobody told me
the taste on the mouth of the jar was just

rust from the lid: I was so sure
it was the kiss of disappointment.
Often, it was hard to tell the clutter

in my bedroom from the clutter in my brain,
loose stacks of magazines and notebooks,
postcards, paperbacks, all mixed up

with the name of some man who might
fly back from Costa Rica
or Nepal and hold still long enough to love me.

Nights when the t-shirt stuck to my back,
and I could feel the hairs sprout on my legs,
why didn’t some grayer, fatter woman

sit me down and say, “Sweetie, this isn’t your life.
This is weather.” Maybe I did see the Empire
State Building’s head on fire in a fog,

but wait a few hours and I would find it had cooled
to a blue coal, the streets all healed. Down the block,
the Italian ice guys would be lifting their garage door,

leading their carts out like ponies,
hosing them down, suds sliding in sheets
across the sidewalk and over the curb’s lip.