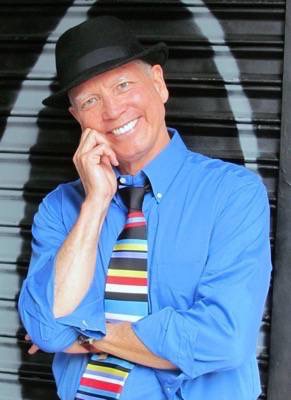 Jon Pearson is a writer, speaker, and artist. He has been published in numerous publications and was nominated for a 2014 Pushcart Prize. He lives in Los Angeles with his beautiful wife and writes now for the same reason he played with his food as a kid: to make the world a better place. You can read more of Jon’s work at www.jonpearsoncreative.com.

A Busload of Banjo Players

So Elya and I are sitting at a small patio table in a nice little breakfast place in Santa Barbara. It’s our anniversary, not our wedding anniversary but the anniversary of the day we first got together at Starbucks five years earlier. It’s a Sunday and the place is packed. We’ve ordered and I’m waiting for my great big cinnamon apple pancake and Elya (like all women) is waiting for something more sensible, a spinach omelet or something, and I say, “Okay, I want you to imagine something, and I mean really imagine it.” And Elya, gorgeous as hell in her Jackie- Kennedy-looking sunglasses, is drinking in my every word. The smell of bacon and pancakes is in the air and roses and I am so happy I practically don’t have a head. The summer sky is my head. “You’re shooting a documentary,” I say, “a nature film. And in the camera frame”—I frame my head and shoulders with my hands like I am in a camera frame—“you have just come across a tree frog, a rare, I don’t know, Amazonian tree frog. And for the next thirty seconds I am going to be that rare, whatever-it-is frog,” I say. “And your job is just to simply watch. But watch like it’s a frippin’ miracle cuz I’ll be going to a place beyond all human understanding—doing funny, subtle little things with my face and hands. I just hope to God the waitress doesn’t bring our food while I’m doing this. The people around us may think I’m having a seizure. But it’ll be worth it. And then, afterwards, you can do your own nature scene.”

Now, many women might say, “Cut it out,” or “What the hell will people think?” or “Not another one of your crazy imagination games,” or “You’re gonna get us arrested?” But sweet Elya, removes her sunglasses and fixes me with her big, beautiful, brown eyes as if to say, “Go ahead, cowboy. Knock yourself out.” And moments later (because along with being a former kick-ass corporate lawyer Elya was also a professional actress) she is doing a dead ringer of a glow fish from the Sargasso Sea, pinching her face into something scary and fishy and ugly and intense while looking gorgeouser and gorgeouser by the second and suddenly I just want to make some kind of primal, prehistoric love to her right there on the patio table as she proves once again that greatest of all secrets—that beauty, real beauty, is far bigger than mere pretty. Pretty paints its toes and hopes you like its purse. It primps. It dallies. It dolls itself up. It licks its lovely teeth and prays somebody’s watching. Beauty, on the other hand, could give a shit. It breaks the rules. It goes for broke. It is an all-or-nothing, radioactive busload of banjo players flying off a cliff; because while pretty can be sweet or cute or nice, beauty is a raging fire. It doesn’t wish or want or worry or wait or look back.

And that is why, Elya, my now wife, is to me the most beautiful woman alive. And it is my solemn, God-given, every-single-day job to keep it that way, to stoke the fires of her deep down beauty, to help her be exactly and fully her one-and-only self. And in fact, in my wedding vows I proclaim: “I shall love her like no man has ever loved a woman.” A tall order. But when the vow first popped into my head, I got so happy I felt like I was riding a bicycle upside down on a cloud and everywhere I looked was Saturday and ice cream. I knew I could never live up to it. I knew I would fail on a daily basis, on a moment-to-moment basis.

Like, for example, there is this little yellow knife in the knife drawer in our kitchen that I am only supposed to use for cutting fruit or something. It’s Elya’s favorite knife or her childhood knife or a knife handed down from the gods. To me it looks like a regular old paring knife. Anyway, I always forget, because when I am looking for a knife I am just looking for a friggin’ knife, let’s say to cut open a box. “Not the yellow knife!” Elya yells. And a near panic seizes me. Damn it! Yes, the yellow knife. Why can’t I ever remember?! Shit.” I think to myself. “I am so sorry.” I tell her. When privately I want to buy a hundred of the stupid things and retire her knife to the Knife Hall of Fame. So here’s another secret: Marriage is about failure. I don’t mean lying and cheating and stealing. I mean garden-variety screw-ups. And, of course, here, I am not referring to the ladies in the audience, only the guys. Every day with Elya I learn how to be a man. My simple new definition of manhood is: the capacity to love a woman without making her your mother. I aspire to be the man-space in which Elya can be all of herself, where she doesn’t have to walk on egg shells or hold back or fit into some unconscious, idealized, self-serving movie in my head.

I met Elya after I had given up all hope. All hope. I was sixty. I had never been married. I figured women had too many working parts, any one of which could go wrong, and I knew that no woman I would want would ever want me. I knew that like I knew triangles had three sides. Then I met Elya, brilliant, beautiful, amazing Elya. And oddly, blessedly, I didn’t feel an ounce of neediness. All I wanted to do was love her. As if I had been storing up love all my life, as if I were this great big circus wagon full of tricks and surprises and all I needed was the right woman, the one who could see past all my clever defenses, and see in me the man who wanted to love her with all his might in his own crazy-ass way. “Why me,” I ask her, “when you could have anyone?” And always she says, “Cuz you bring out the silly in me.” We run through the house like seagulls, we kick our legs in bed making up random poems, we switch childhood memories. I call her Bambina. She calls me Coconut Head. Every day I make her a birthday card and every time we come into the house we hug.

It’s not easy to love. It’s easy to get lazy or selfish or driven or lost in a hundred ways and when the going gets rough to want a fantasy. I always wanted a fantasy. Now I don’t. I’ve had a miracle. And I’ve learned that just as beauty is bigger than mere pretty, intimacy is bigger than any dream. So I don’t care anymore about looking good. I care about being seen. I want to stop running and come home. And I want Elya to feel seen and safe. I want her to feel loved and free. I want her to feel, every single day, like I am the answer to her prayers, because she is the answer to mine.