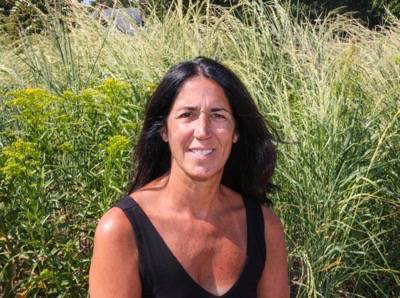 Jennifer Martelli’s debut poetry collection, The Uncanny Valley, was published in 2016 by Big Table Publishing. Her poetry and prose have appeared in Tar River Poetry Journal, Green Mountains Review, and Vector Press. She has been nominated for Pushcart Awards and Best of the Net, and is the recipient of the Massachusetts Cultural Council Grant in Poetry. Jennifer Martelli is a book reviewer for Up the Staircase Quarterly and an associate editor for The Compassion Anthology.

In the fourth grade, my best friend Lorraine and I cut out androgynous paper dolls and had them kiss and make love during our spelling lesson. Our teacher, offended, gave us a choice of punishments. Lorraine chose the first: to eat a sheet of her spelling paper, a three-inch strip made with the machete-bladed paper cutter. Since I feared choking even then, I chose the latter: to write my whole name—first and last—inside the squares of a sheet of graph paper—not each single letter of my name per square: my whole name within a one-quarter inch blue-lined space. (These precise cruelties were not uncommon in public schools during those strange blocks of months ending Johnson’s presidency, and heralding in Nixon’s.) I have a long name: Jennifer (eight letters) and like everybody in my neighborhood, a long, be-vowelled last name, Colella (seven letters). I sat with the graph paper before me, facing down 120 tiny squares. I felt like time had stopped; like someone who wants to wiggle their ears but can’t find the muscles; who has a bone dislocated or meat in their throat. But then the clog was removed and the clock started ticking as if “Love set you going like a fat gold watch" (Plath, “Morning Song”). I began filling in the spaces: J—a black eyelash—in a square, and on top of that, an E, and on top, an N, and another. By the end of detention, I’d created a city of tiny Mayan temples built from the stacked letters of my name and my desperate need to be in my teacher’s good graces again. I filled in that graph paper perfectly, with all the joy and relief of filling a cup with milk so it won’t ever spill, of finding the right word, of completing a sestina. I continue this practice today.

At the American Crossword Championship in Stamford Connecticut, we sit at long white banquet tables, each of us separated by white oak tag dividers. We have our grids, our pencils, there is a stopwatch, and we go. I’ll never reach the master or even the A level where “the cool kids” hang out with Will Shortz, editor of The New York Times Crossword Puzzles, where a Sunday puzzle is solved in ten minutes. But I go to have a weekend of solving. I’m given a grid, and I fill it in. I’m a consistent mid-level solver. The grid might be laid out by a cartographer or an evil architect so it fills up almost without looking at all of the clues. I love that moment when the letters that spell out one clue yield the next clue, which crosses it, and those squares complete the next. Solving the grid is like slipping a key into an oiled lock in a door: the tumblers click and turn and the puzzle completes its own function. The door opens because everything fits; everything that is present should be there.

Bill W. and Dr. Bob describe the 12th step of AA, that point in one’s recovery from alcoholism when a spiritual awakening has occurred, as “the surety that we no longer have to be square pegs in round holes but can fit and belong in [God’s] scheme of things.” I’ve always been fascinated by that definition because it brings this idea of a god to a physical level, to fitting one thing in the other. I’m not sure when I consciously stopped believing in God, and I don’t think it matters. Here’s the thing: everyday, I say a Rosary and it’s a metrical practice, one I do while I walk. “Hail Holy Queen, Mother of Mercy, our sweetness, our life and our hope. To you do we cry, poor banished children of Eve, to you do we send up our sighs, mourning and weeping in this valley of tears.” 58 prayers every day, in order and sequence. Each syllable fits a step, each prayer fits a bead. Mary Ruefle, in her excellent essay “On Sentimentality,” writes about the movement of blood: “as it moves away from the heart, it marches to a 2/4 or ¾ beat . . . and when it turns toward home, the heart—it’s tired, it moves to the beat of a waltz, a ¾ beat.” So, I figure, if I walk while I pray, I’m moving to and from my heart. I feel better when I do it and I figure if there is a God, fabulous, but it’s a skeletal god, a god in a grid.

I was in a workshop on poetry forms and we were discussing the lasting appeal of the villanelle, the sestina, the pantoum. Craft, history, lore all play an important part in constructing one of these ancient poems. I was trying to describe the physical satisfaction of completion: I’ve poured something toxic into a glass shaped like a woman encircled by a serpent and I’ve poured it perfectly. It just feels so good to have a form and to complete it! Marie Howe, in her poem “Death, the Last Visit,” describes it best: “At last (the little girls are clapping, shouting) someone has pulled/the drawstring of your gym bag closed enough and tight. At last//someone has knotted the lace of your shoe so it won’t ever come undone.” Or think of the reach of Bishop’s “Sestina,” where, through the rules of lexical repetition, she plots out her grandmother’s kitchen, but more, is able to—in each line with a specific and obsessive end word—offer her despair, a long bony arm reaching to the end of the line with a Marvel stove, tears, an almanac:

on its string. Birdlike, the almanac
hovers half open above the child,
hovers above the old grand mother
and her teacup full of dark brown tears.

There are no superfluous words. Everything fits, even the grief, which threatens to overcome and overflow.

The best crossword grids seem to ask for more than what the puzzle will hold: an individual square that requires a whole word or a shape, so at first, the clues don’t seem to fit; seem to require more letters than squares. With one of the puzzles, a heart [<3] has to fit in various squares; the clues are 9 across “Kind of surgery” (five letters) and 13 down “Possible result of a spicy meal” (five letters):

A tougher one uses the word “ice” in one square: 27 across “Member of a 1990s pop quintet” (seven letters) and 3 Down “They’re not laid in a cage” (nine letters): The crossword grid is like a limb, too. This arm has a locked elbow joint and the bones are made up of letters and words; crack the elbow and the whole puzzle bends to hand over its solution.

But what does it feel like? In the Westerns and the war movies, a man’s bone is dislocated. Let’s say it’s the scapula, the shoulder blade: that bony wing once used as a conquering king’s serving platter. It’s pulled out of its socket, so the poor bastard is given a broken piece of wood to bite down on, maybe a bullet, is given a swig of whiskey. “Hold him,” the medic or the barber says and the guy screams while being manipulated and then with a loud cartilage suck, the shoulder snaps back into its place and the guy rotates it, swings his neck. “Thanks,” he says and finishes the bottle of whiskey. The pain is being out of the grid, out of the socket, unplugged. Who wouldn’t need that whiskey? Who wouldn’t need a bullet? The screams are the poor attempts, the jamming and not hitting, the cog one 1/100th of an inch off. The bone is the heart. The craft is bringing the bone to its socket. The socket is home.

“ One day, while I was walking, I had this moment of feeling completely at ease: I’d gotten everything done I needed to do that day (a book review, grocery shopping, calls back to people). My obsessiveness had been relieved, if only for a moment! That’s as close to nirvana as I’ve ever gotten; my crossword puzzles come close, though. This essay followed that walk: all the elements fit. ”