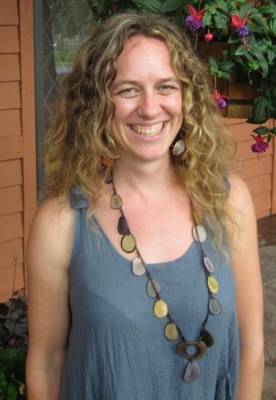 Tamie Parker Song lives and writes in Sitka, Alaska. Other essays of hers can be found in Connotations, Cirque Journal, and terrain.org.

There has been a blow and the waves keep coming, radiating against the beach—and I do mean against—and we just have to take it. The men enter it but I don’t, at first. I’ve had too many weeks, too many years, fear-sickened by the wave of each wave above our rolling boats, again and again and again. I’ve done this my whole life, commercial setnetting for salmon off a small island in the Gulf of Alaska, but somehow today I just can’t.

I stay on shore for the first net-pick, but my stomach heaves anyway because people I love are out in that blow, so on the second pick I go out, and no sooner have I reached the net than the ocean goes calm, as if to my touch.

On the break between the second and third picks, my cousins invite me to pick wild raspberries with them in the inner lagoon. The sea is hot blue now, flat-calm as they say. And we are picking raspberries. We came straight from fishing so we’ve all worn boots, arms spread with fish scales and traces of jellyfish. What is a wild raspberry if not the sun’s blood as known by faith and rain and dirt? The raspberries are wild, as wild as you can get and still be on Earth. We are picking wilderness in thickets higher than our heads, tangled with the nettles and rose thorns and stinging pushki.

We all get stung, my cousins and me, by the nettles, the pushki, the thorns, and the stinging is indistinguishable from jellyfish, sunburn, sweat. The hurting slant of hillside, the startling slash of ocean open-palmed in bounty, drawing blood with the same hand. We’re used to it. We take it with salt. We take it, but that does not mean we are resigned. We’ll pick these raspberries, we will take these raspberries: fuck the bears, the nettles, the pushki, falling tide, sunburn, the muddy ground sucking at our boots, our hunger from fishing all day. Raspberries reddening our fingers, raspberries sweet as grief.

The raspberries are growing all around the cabin that my parents lived in during their honeymoon summer forty years ago. No one has lived in that cabin since, but we still call it Honeymoon Lagoon. The windows are long gone, floor risen toward roof—Earth coming to gather herself—but the linoleum still shines and a blue-painted cupboard still opens when I pull. We walk inside, look around, touch a copper tea kettle tipped on the floor. I can imagine a bed, I can imagine my mother, young and wholly ready to try something lonely and wild for love. I can imagine my father, sincere, truly believing he is able to hammer up a shelter against weather and wilderness, against his own need. Out the pane-less window, I see the view my mother must have seen every day that summer—the inner lagoon, the Alaskan Peninsula. I see the way everything has grown up now, how all that is done, has been over a long time.

We half-fill our buckets with soft raspberries, talking so the bears will know we are here, pushing against stalks and vines with our booted shins, making way for ourselves. And that is how it is in the third generation of this family: the nettles grow up together with the raspberries, so close you can’t pick a berry without being nettled. But we’re used to being stung, and we so want those berries. Even in half-filled buckets the berries at the bottom get crushed. I hardly eat any, as I pick. Later, once I’m home, I eat none, nor share any. Instead, I freeze mine, knowing I will want these berries more in winter than I want them now.

Then we go out for our last net pick of the day, hauling in the blue-bodied, red-fleshed salmon. The sun is on the rim-edge of the horizon. The sea is a haunted child, safe now.

“ This essay is part of my yet-to-be-published memoir, Even the Songbirds, about growing up in a remote part of Alaska, on a 55-acre island with just my family. ”