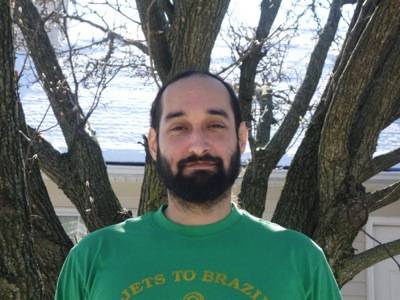 John A. Nieves has poems forthcoming or recently published in journals such as: Southern Review, Poetry Northwest, and Fugue. He won the 2011 Indiana Review Poetry Contest and his first book, Curio (2014), won the Elixir Press Annual Poetry Award Judge’s Prize. He is an Assistant Professor of English at Salisbury University. He received his M.A. from University of South Florida and his Ph.D. from the University of Missouri.

The Moment of the Fall

made sluggish by the cooling
air. The branches hear

the victory squeal, the slow
recoil, a tongue flicked

in hunger. And how could they not
change? The reds and golds

seep subtly into the edges—a slight
tint of things to come, of a forest

stained with setting sun, poised
to shake itself naked

across the lengthening nights’
lingering chill. One small

escape, one tiny failure: a life
spared to bury itself, a yearning

away, lapping up the coming cold. Already,
we are pulling closer, together.

“ When I wrote ‘The Moment of the Fall,’ I was trying to integrate and trouble as much as the web of meaning centered on the word fall as I could: the verb to physically descend, the season Autumn, the Christian mythology of original sin, the verb to initiate a loving relationship, the verb to become of less stature. I wanted to tease out the frayed edge of as many possibilities in as little space as possible.”