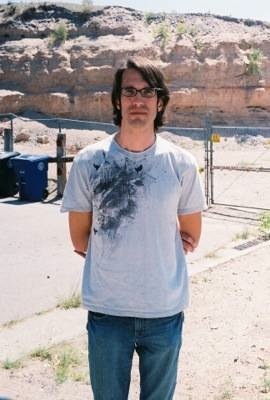 Mike Smith is a 3rd-year Creative Nonfiction graduate student at the University of New Mexico. His historical writings have appeared in magazines and newspapers from across the West, including New Mexico Magazine and the Santa Fe Reporter. His literary essays have appeared in the Eunoia Review and the Florida Review, and he is a music and arts writer for the Weekly Alibi, Albuquerque, New Mexico’s premiere alt. weekly. He is the author of the popular Twitter feed, @New_Mexico_News, and its various print incarnations, and the discoverer of the oldest Spanish rock art in the United States. He is the author of the regional history book Towns of the Sandia Mountains; this third-person list of his accomplishments; and a still-in-progress memoir, Shadows of Clouds on the Mountains.

Notes from a Slowly Dying Suburbanite

Sometimes, I stop and look at my children—Anodyne, my oldest daughter, so smart and creative and beautiful and independent; Hagan, my son, so quick to laugh, so handsome, and with such light in his eyes; and Sonora, my little baby girl, who somehow has the ability to collect all of a person's love and radiate it back to him or her tenfold—and I think, It really would be wrong to take all the money, and the better car, and abandon them.

I think one of the most important skills a parent can cultivate is the ability to comfort an upset child with a simple phrase or metaphor. For instance, yesterday at a party, my six-year-old daughter popped a balloon, and was crying, and I was able to explain that all balloons pop—that's just what they do—just as all humans die, every one of us, even me and Mom, even you. One by one, all the people you love will die, and then you will also. Everything you are and know will cease to be, just like that. Just like that balloon.

It’s so interesting to me how much I can tell about other people just by them telling me they’re “happily married”—like that they haven’t been married very long—or that they’re lying.

Yes, it is just fascinating how much this tells me, about other people.

On a family drive up to Santa Fe, my wife shared a quote with me from educator Maria Montessori.

" ‘Society must recognize the importance of the child as builder of humanity’ ANODYNE! STOP IT! STOP RIGHT NOW, THAT IS RUDE! ‘and come to have an appreciation of the psychic roots determining’ HAGAN, STOP IT NOW! NOW! NOW! OR WE ARE GOING HOME! ‘whether the mature adult will seek positive’ DO I DO THAT TO YOU? STOP! ‘or negative goals.’"

My children have just discovered babytalk. And with it, the limits of my love.

I'm looking for a good book for my children that will help to teach them that when they are really feeling emotional about something, feeling vulnerable or bothered or in need, feeling like just breaking down and crying, that it's okay, it's really okay, it's okay to just not cry, and to be quiet about it.

We are replacing the blinds in my six-year-old daughter's bedroom, so right now a blanket hangs to cover the window. Anodyne didn't want to keep it up because she says it makes the room too dark, casts creepy shadows, and scares her. I explained to her that waking up to strange men staring in through an uncovered window would be way more scary, and I'm guessing by her quietness that that helped to comfort her.

The kids were screaming in the backyard, and one was crying. I ran to the back screen door, throwing it open and accidentally hitting my three-year-old son in the face with it and knocking him off the back steps.

"Hagan, what's wrong, why are you crying?"

"I know, I know, I'm sorry. But why were you crying before?"

But those people probably have way simpler car seats than we do.

Sometimes, when I'm driving along with all three kids, and they're every one of them screaming for whatever reason, I like to roll down the windows and try to trick my mind into believing I'm an ambulance driver.

That's odd, the people I drive past probably think. Ambulance sirens are usually like, way, way, way more relaxing to me.

I think that, from now on, the only traveling I will ever do that will have anything at all to do with children will be traveling back in time to prevent their conceptions.

It's tempting for parents to always offer little short-term incentives to get their kids to act, like, "Come on, get in the car, and I'll give you a piece of gum," but the danger there is that you're ultimately teaching the kids to do things only for immediate rewards. Not good.

So, maybe instead—whenever possible—try to offer lasting, long-term incentives, like, "Come on, get in the car, so I won't stop loving you forever."

Today was shaping up to be another tedious and ultimately futile slog full of housework and home maintenance, but in an instant, everything changed. I was walking out to the car to look for shoes for my kids, when something stuck to my foot in the wet grass. A piece of paper! "INSTANT WINNER," it read. "Free Any One 1.25-1.5 oz. Packet of McCormick Taco Seasoning"!

All I was trying to do was explain the smoke detector, and suddenly all the kids were weeping.

Several times a day, I see surly-looking fellows in my neighborhood wearing red or blue bandannas, I'm assuming as gang colors for the Bloods and Crips. As someone with young children, I suppose the big question I have is, “Which gang should I join to best protect them?”

Because their new pet rat has gray fur, gray paws, and even a mostly stone-gray tail, the kids had no trouble at all finding it a name: Brownie.

My daughter, Anodyne, age six, got a little card in the mail today, saying, "Dear Anodyne—Thank you for the star baby doll. I named her Anodyne. Love, Sophie."

And I said, "That's so cool, Anodyne, none of my friends have ever named a doll after me"—but then I stopped, and it hit me that I don't really know that for sure.

I imagine that when married parents get divorced, it's fairly important for them to sit down with their children sometime, and explain to them, in a calm and loving way, that what happened wasn't entirely the children's fault.

Today I realized that life is just about killing time until you die, so there's really no reason to ever get upset about anything, as it all accomplishes that goal.

Then I realized I had achieved Zen.

Then I was deeply disappointed with Zen.

Then I was okay with it.

“ I wrote 'Notes from a Slowly Dying Suburbanite' after being inspired by Jack Handey’s brilliant-and-hilarious Deep Thoughts books. I wanted to do something like that, but nonfiction—rooted in my persona as a depressed suburban dad and husband. Oh, and for the record, in case anyone was worried, I love my children immensely and they know it. I just happen to have a dark sense of humor. ”