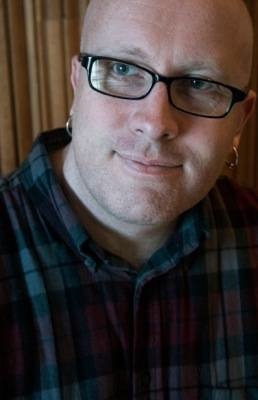 J. Scott Bugher is a writer, artist and session musician living in Indianapolis, Indiana. His poetry and short stories have appeared in a variety of journals and his novel-in-progress keeps him busy. For a more detailed summary regarding his work in the arts, please visit him at www.jscottbugher.com.

When I was trapped and taken away
from the wetlands, it felt like stepping outside
a freezing movie theater in August
somewhere near Death Valley, where airstreams
are the fumes of ten thousand blow dryers
and the sun is within walking distance.
All I could do was panic with the others piled over me
inside the crate. The trapdoor fell open.
We were dropped onto a conveyor belt and transported
to a purging tank where they held us in shallow pools
of water with citric acid and baking soda.
My skin was bleached the color of blood orange.
I had never felt so pure.
Minutes later a group of us were trapped inside
a burlap sack cinched with a drawstring.
There must have been a hundred of us
sacked together, unable to move. We were one hundred
muscle spasms covered in bone, fighting to maintain a pulse.
After our redeye to Cincinnati, we were released
into a cooler of water in the bed of a pickup truck.
The next time the cooler opened, we were in the backyard of
a home filled with happy white people, men and women
speaking English to one another with no distinct accent.
Laughing children with missing teeth
surrounded the cooler. They scattered
once a man wearing latex gloves stood over us.
I was lifted from the reservoir, and the air outside was hot
and humid like it is back home. I could hear a boiling
sound like gumbo on a burning stove,
and every breath I took tasted like propane and lemon.
As the fat bearded man led me away from the cooler,
I noticed a shirtless guy with a tattoo of
Jesus on his chest and a can of beer in his hand.
He was teaching a toddler how to hold one of my own,
how to remove its head and crack its body in half.

“ Witnessing a meaning develop within an unlikely subject matter is the charm I find in writing poetry. In the case of this poem, we're talking about an industry that specializes in shipping bags of sentient beings, which is freaky and can trigger all sorts of meaning. And since most everything I write includes a touch of memoir, this poem metastasized into a metaphoric representation of a sudden life transition I experienced some time ago. I was cozy, doing just fine in the wetlands, but some cosmic hoopla had to interrupt and dropkick me out of the south and into the mid-west, where things got off to a rocky start, but at least I didn't wind up seasoned and dropped into a pot of boiling water. ”