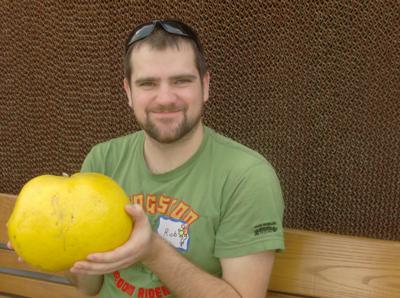 Robert Evory is a creative writing fellow at Syracuse University and the Poetry Editor for Salt Hill and thepoetsbillow.org. He earned his Bachelor degrees from Western Michigan University in Creative Writing and Music. Performing and recording regularly as a professional musician, his latest album Eponymous with the band Good Question was released in May 2010. He is the accompanist for the poet Michelle Bonczek, giving readings across the Midwest and his poetry is featured or is forthcoming in: Redactions: Poetry & Poetics, Pennsylvania English, Nashville Review, Oracle, and the Sierra-Nevada Review.

They look through a telescope lens
like a child looks into a magician's hat
like a woodpecker into a termite vein
like a drunk one-eyed into an empty bottle
they see Saturn’s striated rings
they see the Tycho Supernova
it was like an eye-drop of blood on a black salted plate
a pin in the ear
pebble in the sand
comet the same name of a girl whose hair I used to pull
a pony tail of rocket fuel
a trail of light and dust no one can turn away from
and watch like ribbons in the wind
like a limp broken arm like horror
like the collision with the earth that made the moon
it made two moons
one gets pushed out of the nest
or dad gets hungry and eats it
or it breaks its spine when it falls off its mother’s back
it has yet to be named
it has yet to join its lucky brother
the lucky penny beaten on his back
as it drifts away
blocks out the sun
pulls water like a blanket over a baby’s body
a veil for the dead
hood of a falcon
sleeve of a member
sheath for a knife
eyelids
the supernova happened eight thousand years before it was seen
and lasted for two
it was a white dwarf
and now is like the sun
now we find its light-echo
now we can look into the past like nothing else
like the returning of the dead
like a phoenix from a heartbeat
like crows come out of a black hole
now they see what Tycho, Drake,
Wanli, El Greco, Galileo saw
now time is like two black holes caught in each other’s gravity
now time is blue shift
now they can finish Shubert’s Unfinished Symphony
with a B-flat from a black hole
with a flick of a silver nose
now they look with x-rays
with bowls on their heads
now they see the moon in wave lengths
now they smell the grease of rotating observatories
now they listen with radio telescopes
bulged from earth like the back of a mouse
that grows a human ear

“ I wrote ‘Astronomers’ while reading Frank Stanford’s epic poem ‘The Battlefield Where the Moon Says I Love You.’ I was always intrigued when the astronomer character showed up as a guide for the young protagonist, Francis. I used Stanford’s style of rapid similes and list making to reflect the unlimited possibilities of the universe and how as humans we choose to listen and interpret them. ”