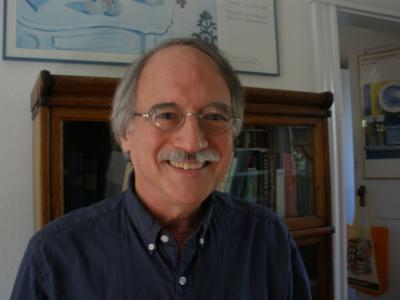 John Drury is the author of The Refugee Camp (Turning Point Books, 2011), as well as two earlier collections, Burning the Aspern Papers and The Disappearing Town, and two books about poetry, Creating Poetry and The Poetry Dictionary. New poems are forthcoming in The Gettysburg Review and North American Review. He teaches at the University of Cincinnati.

How to Stay Awake

Late at night on the interstate, driving
while drowsy, you crank
open the window so the wind starts shoving

with its cold fingers.
But even with coffee, the sedative is silence,
a calm that lingers

in the slow drone of tires on the highway,
like the hushed waves
against a hull that’s rocking on the bay.

In any car,
the wind, however loud, is still a murmur.
What’s a sure

way to keep yourself awake? Just click
the radio on
to something loud enough, not talk but rock,

and don’t just listen—
that’s how a siren lures you to slip under,
seductive assassin,

and merge into a gulf of harmonies.
You have to sing,
open your mouth wide, belt it out, and praise

the means you have
for rescuing your own self from yourself,
to stay alive

by keeping the muscles moving in your mouth,
so your eyes can’t close,
so the song becomes a counter-spell to death.

“ ‘How to Stay Awake’ began partly as a formal experiment, emulating Richard Wilbur’s poems in rhymed haiku stanzas without using haiku, and partly for a series of poems using pet theories and practical advice and then following up on the metaphorical implications. ”