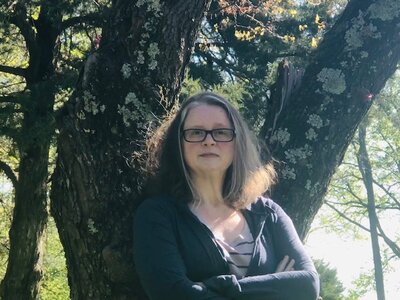 Stephanie McCarley Dugger’s first collection of poetry, Either Way You’re Done (2017), was published by Sundress Publications. Her chapbook, Sterling (Paper Nautilus, 2015), was winner of the Vella Chapbook contest. Her essays and poems have appeared or are forthcoming in Arts & Letters, Mid-American Review, Poet Lore, The Southeast Review, Spoon River Poetry Review, Taos Journal of International Poetry and Art, and other journals. She teaches at Austin Peay State University and is Poetry Editor for Zone 3.

My first mock death was a train ride in the mountains, a comedy show put on for tourists. I was four, standing in the seat to watch. When the man shot his wife, I couldn’t understand why everyone laughed, why no one tried to stop him. The second was my mother, one of our family’s pistols raised to her head, then pointed at my father, then back to her. They yelled as though there were no guns. Later, when she asked why I couldn’t sleep, I told her about the murderers waiting outside, watching for the lights to go out. You know I’d never really do it she said. Years after, when the guns were stolen, the clock my parents received as a wedding gift smashed, our drawers of pictures dumped on the floor, I was relieved. The thief must have known us, known how long to wait, how long we would be away from the house. They must have known what to leave and what to take.

“ I wrote ‘Housebreak’ about one of my earliest memories—a train ride/comedy show my parents took me on at Silver Dollar City. I remember my parents laughing at the scene where a man shot his wife because he was annoyed with her. They were fully enjoying the moment, but I was terrified because I was too young to understand it was an act. That same fear carried on throughout my childhood when my parents had their violent fights, when I was still unsure about what was real and what wasn’t. I assumed they meant what they said, and in those moments, they likely did. ”