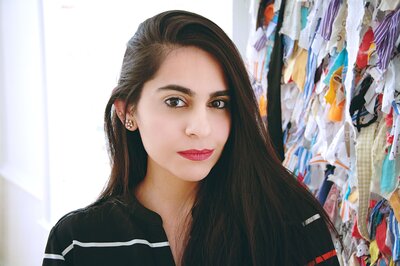 Basmah Sakrani is a Pakistani-Canadian writer living in Memphis TN, with her husband and two dogs. Her work has appeared in Woven Tale Press, Past Ten, Noble Gas Quarterly, and other journals. Most recently, she was a finalist in Big Muddy’s Mighty River Short Story Contest. Basmah contributes as the Fiction Interviewer for The Maine Review. She works at Wunderman Thompson and holds an MFA from Vermont College of Fine Arts.

On the corner of Burnamthorpe and Hurontario is a traffic light. Under it stand a woman and a child, bundled in second-hand puffy jackets and slip-proof boots that fail repeatedly on icy ground. Their arms are linked, the child’s hand mittened, the woman’s bare.

They are waiting to cross the road, woman and child, waiting for the blinking orange hand to transform into a walking green man. It’s definitely a man, that symbol, the woman thinks, because even in icon form, he stands brave and ready, already mid-step before it’s time to go. No woman she knows stands like that.

The green man appears, and the woman yells, “Chalo!” and pulls the child forward with her, forward into the crossing where their boots stomp into half-formed ice puddles and piles of grey slush. Through her heavy hood, she can hear the child’s hurried steps and wants, for a moment, to pause and lift him up into her arms so she can kiss some warmth into those cold apple cheeks. But she rushes onward, so brisk an onlooker might wonder what urgent matter lay on the other side of the road. But really, the woman is rushing because she knows better now, knows not to dawdle at this crossing because it is reason enough for a man in a blue car to roll down his window and yell, “Hurry up you Paki!” She knows because this happened yesterday. Thank goodness she was alone then, and not with the child. On her own, the woman can absorb any and all blows, but the child—he is sensitive. He looks at a leaf and imagines the map of a town where he is a doctor. The woman sees a leaf and imagines nothing.

They are across the road now, woman and child, and traffic rushes by behind them. They are walking slower now, the woman matching her pace to the child, who she knows now must be tired or hungry or both. They have not eaten much today, just an apple and some milk. The bus stop is a hundred feet away and the bus arrives in two minutes, and the woman wants to pull the child forward again now so she can take out her wallet and count out the exact change needed. But she hears the child sniffle and she gives his mittened hand a squeeze. It is so small, this hand, this child, she fears sometimes she will break him.

The child came to her after a decade of waiting and trying. The child came to her after the man she was married to found comfort elsewhere. The child came to her once she had already signaled defeat. He fought for space in her tired bones, made her cry every night for nine and a half months, and was the reason why she crumpled up her suicide note before even writing it. She wouldn’t have gone through with it, she knows, but she wanted to try. She had no one to say goodbye to in her note, no one except the child who kicked her bladder and pressed against her spleen. My organs are his toys, she remembers thinking. I want to get him real toys. A truck and a teddy bear and a basketball and a battery-operated car. The child gave her gumption and here she was, five years later, sauntering toward a bus they would soon board. It’s Saturday, and they will ride downtown together to Union Station. The woman will pay for two seats but hold the child on her lap and smile as he kicks her shins. Later she will find bruises there, brush strokes of slate grey on her skin, and she will ask herself if this is all the touch she is permitted in her life, that of a child and no other man. Together, they will look out the window and marvel at the passing cars, the rising buildings, and the sky which seems to open up as they get further and further away from home.

“ This piece came from an image of my childhood. I grew up in a building at this intersection in Mississauga, ON, and crossing it always felt like a scary experience as a child. It felt necessary to explore a different perspective of this crossing, an alternate existence to the one I had. ”